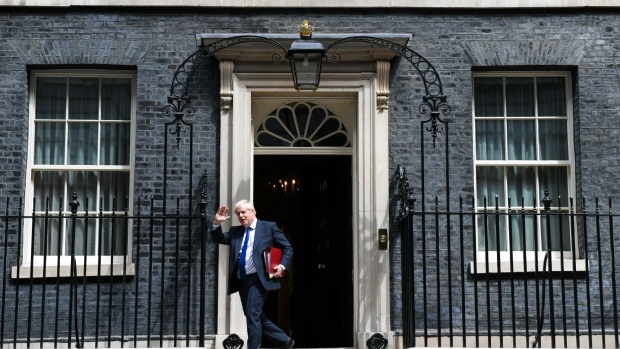 Boris Johnson, UK prime minister, departs 10 Downing Street to attend a weekly questions and answers session in Parliament in London, UK, on Wednesday, July 6, 2022. Boris Johnson is digging in as UK prime minister, after the resignation of two of the most senior members of his government brought his premiership to the brink on another febrile day in Westminster. , Bloomberg

UK Prime Minister Boris Johnson warned his ruling Conservative MPs that he’ll “keep going” in the face of calls for him to quit, as plotters in his party gather to discuss a potential new confidence vote amid a fresh wave of ministerial resignations.

Gary Sambrook, a Tory MP on the executive of the critical backbench 1922 Committee which organizes confidence votes in the party leader, told Johnson directly in the House of Commons on Wednesday that he must “take responsibility and resign.” Former cabinet minister David Davis also repeated his call for the premier to quit.

A ballot could come as soon as next week, a person familiar with the matter said, with members of the 1922 Committee due to meet later on Wednesday to discuss Johnson’s future.

“The job of a prime minister in difficult circumstances when he’s been handed a colossal mandate is to keep going and that’s what I’ll do,” Johnson told MPs at Prime Minister’s Questions.

That remark was in response to Tory lawmaker Tim Loughton, who asked whether he thought “there are any circumstances in which he should resign.” It’s a signal that the premier sees his mandate as coming from the electorate -- which delivered him a thumping majority in 2019 -- rather than his MPs.

Johnson was facing MPs publicly for the first time since the resignations of Chancellor of the Exchequer Rishi Sunak and Health Secretary Sajid Javid on Tuesday. There has been a steady flow of Tory MPs resigning from more junior positions since then.

The final straw for many has been Johnson’s handling of a scandal involving Chris Pincher, an MP who the prime minister promoted in February despite receiving prior warnings about inappropriate behavior.

“I greatly regret that he continued in office,” Johnson told MPs. “In hindsight I should have realized he would not change.”

But Labour leader Keir Starmer said it was time for Johnson to quit: “Isn’t it the first recorded case of the sinking ships fleeing the rat?”