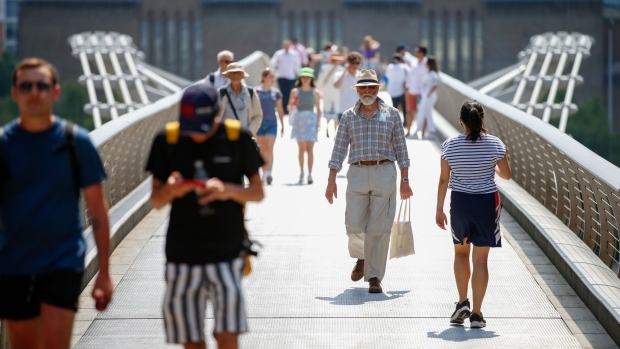 Scientists have been puzzled by the recent decline in infections, citing the recent mini heatwave, start of the school holidays and the end of the soccer European Championship as potential factors -- alongside the vaccine rollout.

But government officials and scientists also point out that even the latest data doesn’t yet reflect the impact of lifting virtually all pandemic restrictions in England on July 19. Given the lag between infections and hospitalizations, it will also take some weeks before lower case numbers translate into easing pressure on the National Health Service.

“We are six days into some better figures but it’s very, very important that we don’t allow ourselves to run away with premature conclusions about this,” Johnson told broadcasters on Tuesday. “Step four of the opening-up only took place a few days ago, people have got to remain very cautious and that remains the approach of the government.”

The U.K. recorded 24,950 new cases on Monday, a sixth consecutive decline and well below the 39,950 recorded a week earlier.