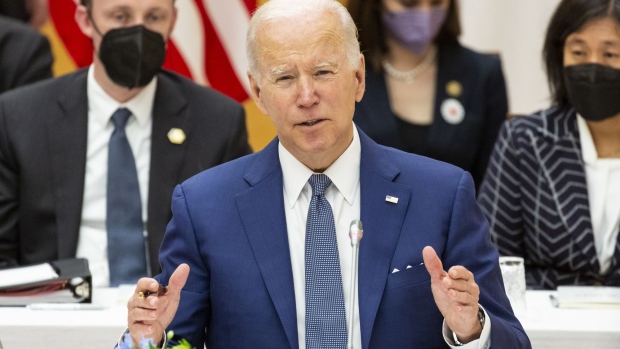 US President Joe Biden speaks during the Quadrilateral Security Dialogue (Quad) leaders meeting at the prime minister's official residence in Tokyo, Japan, on Tuesday, May 24, 2022. A meeting of the leaders of the four-nation security grouping was held on the final day of Biden’s first trip to Asia since taking office. , Bloomberg

(Bloomberg) -- Japan and South Korea criticized a joint drill by Russian and Chinese warplanes near their air spaces that came as US President Joe Biden wound down an Asia trip to seek support from allies over Vladimir Putin’s invasion of Ukraine.

Russia and China may have conducted one of its largest joint air drills in the area since last year to send a message during the Biden visit, Kim Tae-hyo, a deputy national security adviser, said Wednesday.

“The fact that China and Russia prepared and planned this on May 24 is probably because they wanted to send their own political, economic and military message to the international community,” Kim said.

Chinese and Russian military aircraft entered South Korea’s Air Defense Identification Zone on Tuesday morning, according to the government in Seoul. China sent multiple planes that included two bombers, while Russia sent two bombers and two jet fighters on the mission. It included flights south of the Korean Peninsula and over waters between South Korea and Japan, officials in Seoul said.

Japan and South Korea scrambled fighter jets in response to the drill, which took place while Tokyo was hosting a summit of fellow Quad countries Australia, China and the US.

The air zone isn’t South Korea’s territorial air space but it is an area where aircraft are supposed to identify themselves as they draw near it. China and Russian planes often enter the airspace, but haven’t done so together at a similar scale since November 2021, Kim said.

The drill was also the first of its kind since Russia’s invasion. The Biden administration has warned Beijing that it would face consequences if it provided support to its long-time friend Russia to fight the war in Ukraine.

Biden said during the Quad meeting that leaders are navigating “a dark hour in our shared history” due to the war.

China tried to calm neighbors, saying its joint strategic air patrol with Russia didn’t target any third party and had nothing to do with current international and regional situations, according to a statement from the Defense Ministry.