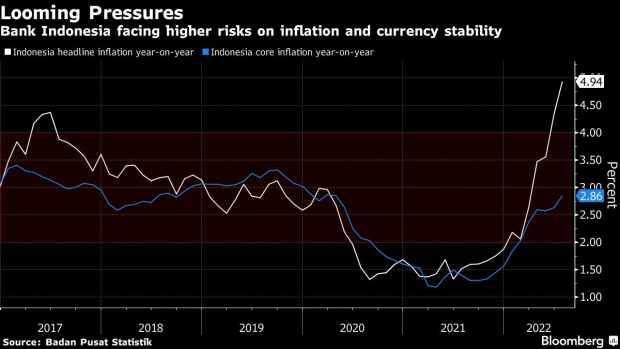 (Bloomberg) -- Indonesian President Joko Widodo once again pushed for changes to the central bank’s charter to task monetary authorities with supporting jobs growth along with maintaining currency and price stability.

“Bank Indonesia’s mandate is not only to manage the exchange rate stability but also inflation stability. It would be better if job creation was included,” Widodo, 61, said in an interview with Bloomberg News Editor-in-Chief John Micklethwait on Thursday.

The latest draft of the proposed changes to the central bank charter seen by Bloomberg in June includes an expanded mandate on economic growth and job creation. It would also allow Bank Indonesia to buy sovereign bonds in the primary market during financial crises to formalize what was a temporary “burden sharing” arrangement to aid the government’s pandemic response.

It’s the third straight year the government is pursuing the measure first proposed in 2020. The plan had drawn criticisms that it could compromise central bank autonomy. The parliament has resumed discussions on the bill.

“We believe that the financial sector needs reform that strengthens coordination to maintain financial system stability, especially after the pandemic crisis,” Deputy Finance Minister Suahasil Nazara said at a parliamentary hearing on the bill on Thursday.

The president’s re-emphasis on the law is “telling” and likely signals the passage of such amendments in parliament, said Wellian Wiranto, an economist at Oversea-Chinese Banking Corp. in Singapore. At a time when inflation is the market’s top concern, it raises the question of how the bank could strike the right balance between employment and price control, he said.

“That may be especially more crucial given Bank Indonesia’s expressed reluctance to hike rate thus far, even against the lingering inflation pressure,” Wiranto said.

Bank Indonesia doubled-down on its dovish stance at a separate meeting on Thursday, saying it doesn’t see the need to raise interest rates despite inflation at a seven-year high, as it looks to keep supporting an economy showing signs of a sustained rebound.

When asked during the interview whether Bank Indonesia is due for a rate hike, Jokowi, as the president is popularly known, said that it’s “not the government’s business” to interfere in the central bank’s decisions.

“The BI interest rate is a central bank matter,” he said. “They have their own calculation on why they don’t increase rates.”

(Updates with comment from economist in sixth and seventh paragraphs)