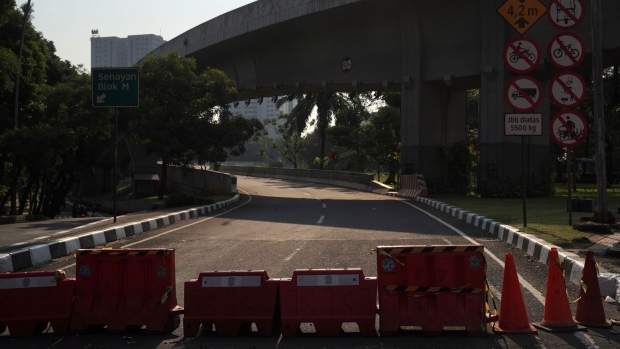 A street vendor is set up on a near-empty road in Jakarta, Indonesia, on Wednesday, July 28, 2021. Indonesia is speeding up vaccination to reach herd immunity as the highly infectious delta variant of the coronavirus continued to tear through the country. , Bloomberg

(Bloomberg) -- Indonesia’s President Joko Widodo said the country still can’t resort to a full lockdown even as it tops the world’s daily number of coronavirus deaths.

“As I visited the villages and the cities, so many people are screaming for a reopening -- this is only a semi lockdown, not a full lockdown,” he said in an address to small entrepreneurs on Friday. “I also stress, a lockdown won’t necessarily end the problem.”

Jokowi, as the president is known, has resisted calls for stricter curbs. The country is home to more than 70 million informal workers, who are most vulnerable to any movement limits. The pandemic has already dragged nearly 3 million Indonesians below the poverty line.

The government is relying instead on its mass vaccination campaign, with a target of inoculating 70% of the population by year-end in a bid to reach herd immunity. About 7% of people have been fully vaccinated so far, according to Bloomberg’s vaccine tracker.

Indonesia has started to ease virus restrictions in some parts of Java and Bali islands as the number of cases and deaths ease in those areas. The number of active cases in the capital Jakarta has dropped to the least since mid-June. Across the country, the highly-transmissible delta variant is spreading rapidly, with Central and East Java provinces bearing the brunt of fatalities. The current measures are in place until Aug. 2.