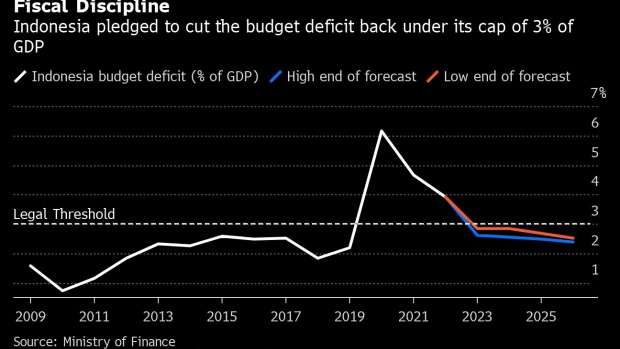 (Bloomberg) -- After three years of fighting the pandemic, President Joko Widodo is determined to fulfill his promise of restoring fiscal discipline while sustaining growth and protecting Southeast Asia’s largest economy from surging inflation.

Jokowi, as the Indonesian president is known, will deliver his annual budget speech on Tuesday that will outline how his government intends to bring fiscal consolidation back on track in the face of swelling state spending for energy subsidies and infrastructure next year, ahead of his final term in 2024.

Indonesia is seeking ways to return to a 3% deficit target policy it abandoned in 2020 as spending swelled during the Covid-19 crisis. It comes at a time when global inflation surges in the wake of the Ukraine war. That adds to the challenge in attracting investments to help plug the funding gap, with the government’s burden-sharing arrangement with the central bank set to end this year.

The program included Bank Indonesia’s 836.6 trillion rupiah ($57 billion) bond purchases directly from the government, in addition to purchases made in the primary market over the past three years.

“The biggest challenge is how the government can reduce the deficit to below 3% amid easing windfall from commodity prices while continuing its sizable economic development agendas in 2023,” said Faisal Rachman, an economist at PT Bank Mandiri in Jakarta.

Here’s what to watch for in the 2023 budget proposal:

Budget shortfall may be set within a range of 2.61%-2.85% of GDP according to the latest estimates approved by parliament. That’s narrower than the projected 3.92% in 2022 as the resource-rich nation expects the commodity rally to continue. The government will also cut some pandemic stimulus to reduce spending.

“The government could also use its unspent cash which is likely to remain high by the end of this year, to reduce its financing plan in 2023,” said Luthfi Ridho, chief economist at PT Indo Premier Sekuritas. Slow government spending, apart from subsidies, has piled up 302.8 trillion rupiah of unspent cash as of July.

The subsidy bill will continue to swell next year to maintain administered prices for fuel and electricity. Subsidies doubled to 502 trillion rupiah this year, mostly to compensate state oil firm PT Pertamina and state utility PT Perusahaan Listrik Negara for higher costs. That has managed to keep prices in check despite inflation nearing 5% in July, breaching the central bank target of 2%-4%.

“It’s very important for the government to ensure a well-targeted subsidy policy so that it doesn’t become a spendthrift behavior,” Mandiri’s Rachman said.

Jokowi may set higher infrastructure spending as he moves ahead with the relocation of the capital from Jakarta to a new city on the island of Borneo. He has until 2024 to complete the first development phase – building government offices, schools and hospitals - that would cost the budget 50 trillion rupiah.

The 2023 budget will also include funds for the 2024 elections. Parliament has approved 76 trillion rupiah budget for campaigning programs, voting, and vote counting process.