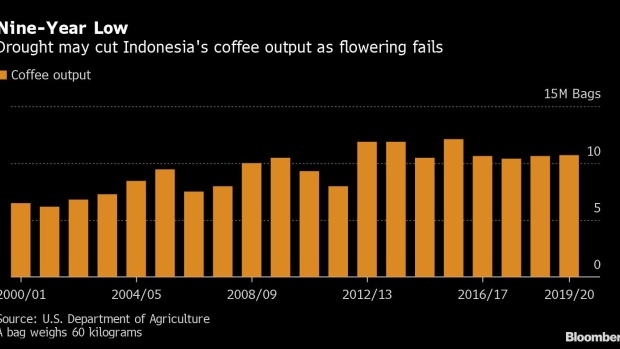 (Bloomberg) -- Coffee production in Indonesia will probably shrink to the smallest in almost a decade after a drought withered flowering, damping prospects for next year’s harvest, according to an industry association.

The Southeast Asian country is the world’s third-largest producer of the robusta variety used in espressos and instant drinks, and most is grown in the southern part of Sumatra island, the areas that have been hit by drought. Some arabica is grown in northern Sumatra and in Java.

The dry spell could cut total output to 10 million bags in the year starting in April from 11.5 million to 12 million bags in the current year, said Moelyono Soesilo, head of specialty coffee and processing at the Association of Indonesian Coffee Exporters and Industries. That’d be the smallest since 2011-2012, according to U.S. Department of Agriculture data. Each bag is 60 kilos.

Benchmark robusta futures traded in London slumped to the lowest level in more than nine years in October due to a global supply glut. Prices have climbed more than 10% since then, and a smaller crop in Indonesia could extend that advance, increasing costs for espresso and instant coffee makers.

“The drought is quite severe,” Soesilo said on Monday. “Precipitation is still very low in Lampung,” he said, referring to one of the three major producing provinces. “The lowlands are the most affected, with output from those areas probably dropping 30% to 40% next year” as trees have withered and flowering failed, he said by text message.

Soesilo’s estimate was based on sightings from a tour in several growing areas of Lampung last week. The lowland areas of Bengkulu and South Sumatra provinces have also faced similar dry conditions, with rains only returning last month, Soesilo said. The drought may delay the start of the main harvest next year to June from April-May, he said. The highlands could be less affected.

Lampung, Bengkulu and South Sumatra, the Golden Coffee Triangle, are the main robusta regions, producing more than 70% of the country’s total output.

Vietnam is the world’s largest producer of the robusta variety, and the harvest is now under way. While rains have delayed collection and drying of the beans, the crop could be about 5% higher this harvest than last year, because of earlier favorable weather and higher yield varieties.

To contact the reporter on this story: Yoga Rusmana in Jakarta at yrusmana@bloomberg.net