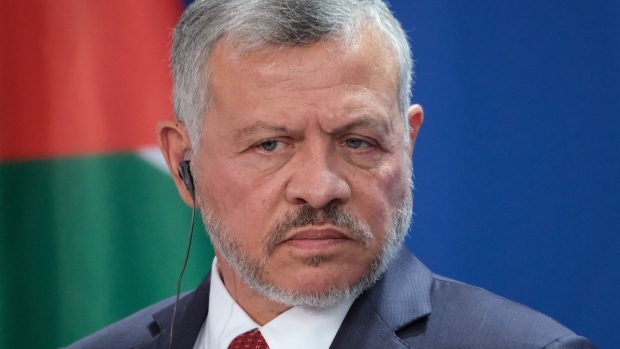 (Bloomberg) -- Jordan’s King Abdullah II described the “pain and anger” he felt after his half-brother was accused of involvement in a plot to destabilize the kingdom, but said the threat had been squashed.

Former Crown Prince Hamza Bin Hussein remained “with his family in his palace under my protection,” the monarch said, following reports that his sibling was placed under a form of house arrest at the weekend. The “strife has been buried,” he said.

The turmoil within Jordan’s royal family is being closely watched in the Middle East. The kingdom sits at the crossroads of the Israeli-Palestinian conflict and is home to as many as 2 million Palestinian refugees and their descendants. Upheaval there could endanger the security of Israel, with which it shares a frontier and made peace in 1994. Bordering both Syria and Iraq, Jordan has also fashioned itself as a force for moderation in a turbulent neighborhood.

“Nothing compares to the shock, pain and anger that I felt as a brother, the guardian of the Hashemite family and as a leader to this dear people,” the king said in a short statement that marked his first public comments on the family feud.

In a Sunday news conference Deputy Prime Minister Ayman Safadi said Hamza had allegedly worked in concert with foreign entities and more than 16 people, including at least one other royal, were taken into custody.

The former crown prince then signed a letter stating he would remain faithful to the king and committed to the constitution, two days after he had released a voice recording and sounded defiant. In that recording reported by Sky News Arabia, Hamza said he was under house arrest and that he would disobey orders by the army to stop going out and communicating with the public.

On Wednesday, the king said he had asked his uncle, Prince Al Hasan Bin Talal, to resolve the dispute with Prince Hamza within the family. He said the case was still under investigation, without elaborating.

“Prince Hamza expressed his commitment in front of the family to remain on the path of our fathers and grandfathers, to remain loyal to their message and place Jordan’s interest and constitution above all else,” the king said in the statement read on TV.

Hamza was the crown prince for four years before the title was transferred in 2004 to the current king’s eldest son, Hussein. He has occupied various roles, including brigadier in the Jordanian army.

Among the detainees is Bassem Awadallah who has served in various positions in Jordan, including minister of finance and head of the royal court. Until 2018, he was King Abdullah’s personal envoy to Saudi Arabia, where he was close to Crown Prince Mohammad bin Salman.