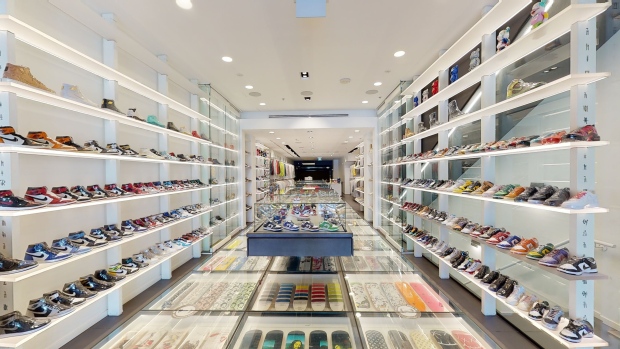 During his freshman year of college in 1996, Jordan Geller spent the money his parents  gave him for living expenses on a pair of sneakers – the highly coveted and newly released Air Jordan 11 OG 'Bred' shoes.

“I was 19 when I bought my first pair of Jordans, and back then, I didn’t consider them assets -- they were just things that I loved and I always wanted as a kid, but couldn’t have, because they were too expensive,” Geller said in a phone interview.

“I only walked on the heels of the shoes because I didn’t want to get creases on the toes. And every day after I got home to my dorm, I cleaned them with a tooth brush to keep them as pristine as possible.

Whether it’s partnerships with luxury brands or collaborations with celebrities or athletes, sneakers have caught the eye of alternative asset buyers looking to make a profit on the resale market with these limited shoe releases.

The growing popularity of shoes as an alternative asset has even attracted the attention of investment firms.

In a note to clients dated June 6, Cowen Inc. estimated the sneaker and streetwear resale market has the potential to reach an estimated US$30 billion globally by the fiscal year 2030.

“Our proprietary work confirms sneaker resale remains one of the most permanent trends in Consumer as transient pandemic spending patterns fade into 2023 –  and we are further reinforcing the bullish category calls we have made since  2019. Sneaker resale is significantly outperforming the broader e-commerce  ecosystem, which is decelerating into early 2022,” the report outlined.

In 2000, when Nike released a retro version of the same Jordan shoe Geller bought four years prior, he decided to try and sell his old sneakers to help cover the cost of a brand new pair.

When it comes to breaking down the immense demand for these sneakers as an alternative asset, Geller said you need to look at Michael Jordan’s loyal fan base.

“To start and describe the lore around Jordans, you need to understand that Michael Jordan is so charismatic, so many adore and worship him,” said Geller.

“A lot of us grew up watching him and wanted these shoes but they were too expensive. The nostalgia that we all feel for that sneaker makes us want to have it but Nike keeps releasing shoes in limited supply, so you’re paying two to three times more  on the resale market.”

StockX, a trading platform for alternative assets such as sneakers and trading cards, said Jordan shoes were the top-selling brand on its platform in 2021, with Jordan sneakers reselling for 54 per cent more than the retail price.

“The popularity of Air Jordans can largely be tied to the exclusivity level. Virtually every Jordan release is limited edition, meaning there is never enough to satisfy the market demand,” said Jesse Einhorn, senior economist at StockX, over email.

Einhorn said demand for Jordans is also tethered to pop culture. After the April 2020 release of “The Last Dance” on Netflix, a documentary that followed Michael Jordan and the Chicago Bulls as they went for their sixth National Basketball Association title in 1997, Jordan sneaker trades rose more than 40 per cent.

While many retailers experienced a slowdown in demand during the COVID-19 pandemic, some collectable store owners said they benefited from a surge of customers looking to spend extra cash on hand.

“I suppose because people got their stimulus checks and whatnot, they had more disposable income to spend on things. Many people were stuck at home and they wanted to do something with their money,” said Godfrey Chui, owner and head buyer of streetwear retailer OD Toronto, in an interview.

“The other reason why the market is up is because there was a huge movement and subculture of new collectors on TikTok, so recently, there’s been a spike in demand, especially for female sneakers.”

Prior to the pandemic, Chui said he offered about 15 to 20 pairs of women sneakers in his store and has now expanded to have an entire wall dedicated to them.

Makeway Co-owner Shelby Weaver said there’s always been a really strong group of female collectors but with a significant shift to remote work during lockdowns, more people have gravitated towards buying casual apparel.

Weaver said Jordans are the most popular shoe at her store, which targets women and members of the LGBTIQA+ community.

“It’s by far our most popular brand. It's even difficult to get an account with [the Jordan brand] now so already having one is almost a privilege in the sneaker world,” Weaver said over the phone.

Weaver added over the past five years, the shoe brand has started to focus more on what female shoe collectors want, but that many product releases are being bought up by investors who want to make money off of the collection rather than wear them.

“It’s a bit of a weird gray area for stores because demand is really high right now which  makes us really successful but many people are buying them up just to resell, which takes product away from people who love to wear them. I guess it’s just what the sneaker game is now,” she said.