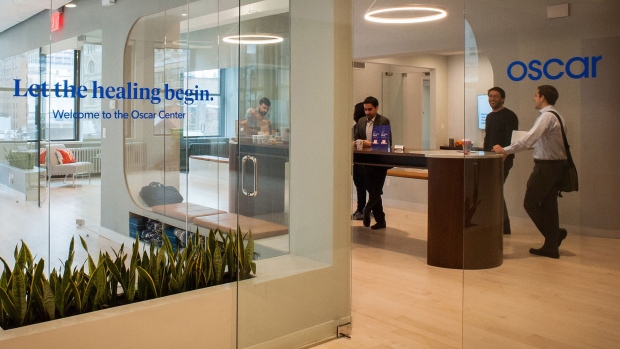 Signage is displayed on a glass door inside the Oscar Center in the Brooklyn borough of New York, U.S., on Wednesday, Dec. 7, 2016. The Oscar Center runs in partnership with Mount Sinai Health Systems providing primary care services and health and wellness programs. Photographer: Kholood Eid/Bloomberg , Bloomberg

(Bloomberg) -- Oscar Health Inc., the health insurance startup co-founded by Josh Kushner, is seeking as much as $1 billion in its U.S. initial public offering.

The New York-based company and its existing shareholders are offering 31 million class A shares at $32 to $34 apiece, according to a Monday filing with the U.S. Securities and Exchange Commission.

At the top end of that range, the Oscar Health would have a market capitalization of $6.7 billion, according to Bloomberg calculations.

Class A shares are entitled to one vote while Class B shares will have 20. Upon the listing, Kushner and Thrive Capital will control the majority of the voting power, the filing showed.