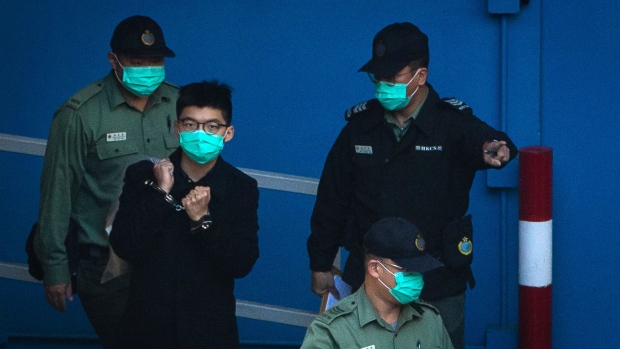 Joshua Wong, activist and former member of pro-democracy party Demosisto, walks towards a Correctional Services Department (CSD) vehicle at the Lai Chi Kok Reception Center to be transported to the Eastern Law Courts in Hong Kong, China, on Friday, Dec. 18, 2020. U.S. Secretary of State Michael Pompeo accused Hong Kong of using the courts to engage in "political persecution" after prominent activists were detained and a former opposition lawmaker fled to Europe. , Bloomberg

(Bloomberg) -- Hong Kong activist Joshua Wong will plead guilty in the city’s largest national security case, local media reported, after being detained for more than a year without a trial date under the China-drafted law.

The already jailed former student leader is among 29 democracy advocates expected to enter guilty verdicts over subversion charges linked to a primary held in July 2020, according to local media outlets including HK01. Former law professor Benny Tai, protest organizer Jimmy Sham, and ex-lawmaker Claudia Mo were among those expected to accept the charge.

News of the expected guilty pleas came a day after it was revealed Justice Secretary Paul Lam had ordered the case to be tried by a panel of three handpicked security law judges, rather than a jury. Most of the plea intentions, however, were entered between June 1 and July 6, according to local newspaper Ming Pao.

Details from those court appearances were only made public Thursday when reporting restrictions on the case were lifted, after a court in a separate landmark security case the day before overturned such limits.

The 47 activists are being prosecuted over their role in organizing a vote that drew more than 600,000 voters to choose candidates for Legislative Council elections. Authorities claim that event was part of an illegal attempt to paralyze the government.

Some 30 defendants have been held without bail for more than a year, under the higher threshold set by the security law, which Beijing imposed on the city in June 2020 and carries sentences as long as life in prison.

Hong Kong courts have revoked bail for two defendants in the past year. Activist Owen Chow was rearrested on Jan. 13 for social media posts violating his release terms of “not making any speech that can be reasonably deemed as endangering national security,” local media including HK01 reported. Former union representative Winnie Yu was sent back to jail on March 8 for the same reason.

Only two defendants have so far fought security law charges at trial. Both have been convicted and handed sentences as long as 9 years in prison, illustrating the high stakes for those who take on the government. Last year pro-democracy activist Tony Chung, who plead guilty, was sentenced to three years and four months in prison -- the lightest sentence handed down.

National security police have made some 215 arrests, from which government has sought to prosecute at least 114 people.