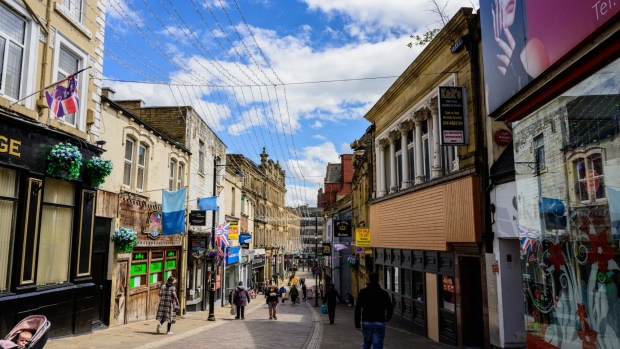 Shoppers on a pedestrianized shopping street in the center of Bradford, UK, on Saturday, July 2, 2022. UK consumers are starting to crumple in the face of soaring prices, according a series of reports that paint a grim picture of the nation’s cost of living crisis. , Bloomberg

Joules Group Plc: The British lifestyle company’s trading has “softened materially” since its last update as a result of warm and dry weather reducing sales of its rain-proof and warm clothes and accessories and as weaker consumer sentiment requires heavy discounting to entice sales.

The Financial Conduct Authority: The UK watchdog warned buy-now-pay-later companies that their adverts could mislead customers if they emphasize the benefits of the products without also warning of risks like the consequences of missing payments or possible impacts on credit scores.

Kingspan Group Plc: The insulation maker says inflationary pressures have eased in recent months, but the impact of shorter energy supply over winter will be something they’ll have to monitor closely.

Retail Sales: Britain’s online stores drove an unexpected jump in retail sales last month, offsetting declines across much of the rest of the industry.

UK consumer confidence fell to a record low as concerns about a recession increased and soaring inflation tightened a squeeze on household finances. And the crisis of confidence is set to worsen “with the darkening days of autumn and the colder months of winter,” according to Joe Staton, client strategy director at GfK.

That’s as London’s tube network largely grinds to a halt today as workers go on strike.

Listen to Bloomberg Opinion’s Javier Blas talk about the terrifying moment London paid a record price for electricity in order to keep the lights on — and how the capital will avoid a blackout this winter.

And it’s been three months since James Anderson retired from Baillie Gifford, the century-old Scottish money manager he transformed into an unlikely power-investor in global technology. Now, the Edinburgh-based stock picker is trying to adapt.

S&P Global’s index of private-sector growth will be closely watched next week for clues about how much businesses are struggling with inflation and how that might impact the pace at which the Bank of England is raising interest rates.

The Readout with Allegra Stratton will be back from its summer break on Aug. 30. In the meantime, here’s what Bloomberg journalists are reading this summer.