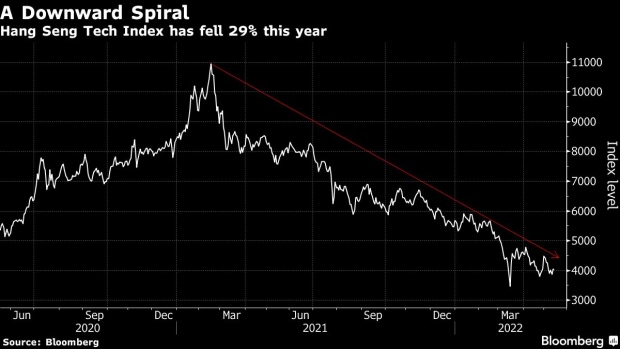 An electronic screen displays the stock codes for companies including Tencent Holdings Ltd., Meituan and Alibaba Group Holding Ltd. in Hong Kong, China, on Tuesday, March 15, 2022. Chinese stocks suffered another deep selloff on Tuesday as concerns about the country’s ties with Russia and persistent regulatory pressure sent shares on a downward spiral. , Bloomberg

“Significant uncertainties facing the sector should begin to abate on the back of recent regulatory announcements,” analysts led by Alex Yao wrote in a May 16 note. Shares of Meituan, NetEase Inc. and Pinduoduo Inc. were also among those upgraded.

The change in view comes as investors remain cautious about China’s battered tech sector, with worries about persistent regulatory risks and Federal Reserve hikes adding pressure. Chinese tech stocks hit new lows in mid-March, and had since then seen only brief bouts of recoveries despite repeated vows from top officials to stabilize markets and prop up the economy.

Hong Kong’s Hang Seng Tech Index is down nearly 30% this year, though it remains well off its mid-March lows.

The Wall Street bank had received blowback in recent months after reports penned by Yao and his team were published calling the sector “uninvestable”. The evocative label helped erase some $200 billion from U.S. and Asian markets and prompted one Chinese technology firm to downgrade JPMorgan’s underwriting role on an upcoming initial public offering.

READ: JPMorgan’s ‘Uninvestable’ Call on China Was Published in Error

JPMorgan in the latest report said policy developments since their mid-March call have been supportive, diminishing risks related to regulation, delisting of American Depositary Receipts, and geopolitics.