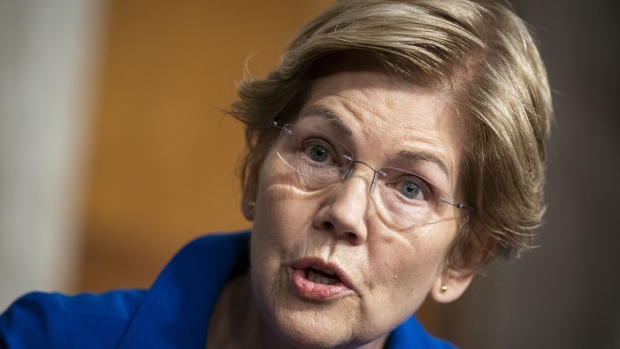 Senator Elizabeth Warren, a Democrat from Massachusetts, speaks during a Senate Banking, Housing and Urban Affairs Committee hearing in Washington, D.C., U.S., on Tuesday, Nov. 30, 2021. The Federal Reserve chair, in his first public remarks on the omicron variant of the coronavirus, said it poses risks to both sides of the central bank's mandate to achieve stable prices and maximum employment. , Bloomberg

(Bloomberg) -- Democratic Senator Elizabeth Warren called on JPMorgan Chase & Co. and other banks to follow Capital One Financial Corp., which on Wednesday became the largest bank to eliminate overdraft fees.

The charge -- levied when customers spend more than they have in their checking accounts and the bank temporarily covers the difference -- has been criticized by lawmakers and regulators.

“Bank overdraft fees snatch billions from struggling families & even during this pandemic, big banks raked in billions from this abusive practice,” Warren wrote in a tweet. The Massachusetts lawmaker earlier this year criticized JPMorgan Chief Executive Officer Jamie Dimon as “star of the overdraft show.”

Overdraft revenue across the banking industry had risen prior to the pandemic but fell during lockdowns as consumers pulled back on spending and banks waived the fees.

Still, the Consumer Financial Protection Bureau said Wednesday banks “rely heavily” on overdraft and non-sufficient funds revenue. JPMorgan, Wells Fargo & Co. and Bank of America Corp. brought in 44% of the total reported in 2019 by banks with assets over $1 billion, according to the regulator.