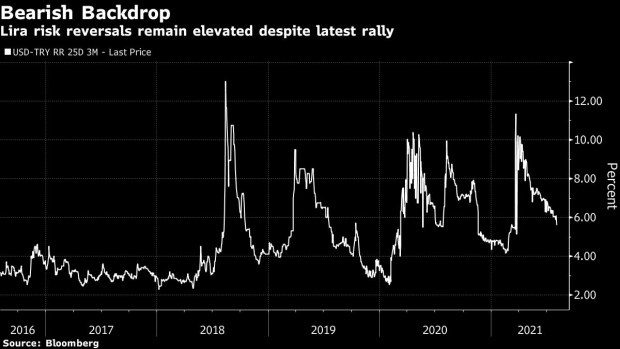 The lira’s best month this year may only serve to highlight the volatility that still haunts Turkish assets.

For JPMorgan Chase & Co.’s top executive in Turkey, swings in the currency remain a key hurdle to convincing investors to buy into the appeal of local securities.

Markets are also on alert for how price growth, already at a two-year high, performs in the months ahead, Mustafa Bagriacik, senior country officer for Turkey and Azerbaijan for the U.S. lender, said in an interview.

“The predictability of inflation and the currency are the two most important things to increase appetite for lira-based assets,” he said. “If you can fix those, the rest will follow.”

The lira rose 3% against the dollar in July, bolstered by the U.S. Federal Reserve’s dovish tilt and as concerns over a premature interest-rate cut in Turkey faded. That’s the best performance across emerging markets, and a stark turnaround for a currency that tumbled to a record low earlier this year.

Still, at more than 14%, the lira’s implied volatility over the next three months remains among the world’s highest, undermining the currency’s yield appeal. It’s also deterring capital inflows, according to Bagriacik, which the economy needs to finance its current-account shortfall.

Central Bank Governor Sahap Kavcioglu has kept the policy rate unchanged at 19% since he was appointed in March, looking past President Recep Tayyip Erdogan’s calls for looser policy. And it means the lira now boasts one of the highest nominal rates in the developing world.

Yet foreign investors spooked by the market rout that followed his predecessor’s ouster have pulled a net a $472 million out of the local-currency bond market since then, a sharp unwind that’s seen cumulative inflows into the securities top $1.3 billion this year.

“When you look at comparable countries/regions like Russia, South Africa, MENA, they are getting significant funding from the global markets that obviously helps their growth,” Bagriacik said.

Inflation meanwhile has risen almost every month this year. Higher energy costs and the impact of a reopening economy on everything from food to apparels drove the pace of price gains to an annual 18.95% in July, nearly reaching the level of the central bank’s benchmark interest rate.

The central bank raised its year-end inflation forecast to 14.1% from 12.2% last week. Less than two years ago, annual inflation was briefly below 9%.

The bearish sentiment is also evident in the market for so-called risk reversals, where the premium investors pay for options to sell the currency over those to buy it stands at more than 6%. That’s more than double the rate on the Russian ruble, the closest runner up.

“In Turkey, inflation is something that everybody’s worried about at the moment,” Bagriacik said. “For the next couple of months, markets will be looking at the trend of inflation for the rest of the year, and most importantly for 2022 guidance.”

Other highlights from the interview are as follows: