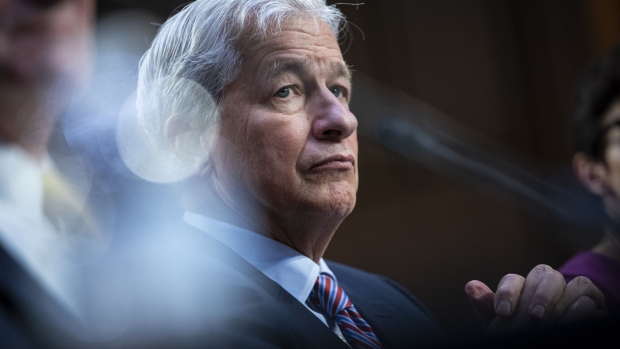 Jamie Dimon, chairman and chief executive officer of JPMorgan Chase & Co., speaks during the Institute of International Finance (IIF) annual membership meeting in Washington, DC, US, on Thursday, Oct. 13, 2022. This year's conference theme is "The Search for Stability in an Era of Uncertainty, Realignment and Transformation." Photographer: Ting Shen/Bloomberg , Bloomberg

“Why do we allow this stuff to take place,” Dimon said in an interview with CNBC on Tuesday. He spoke as contagion from the collapse of FTX spreads.

The bank boss told lawmakers in September that cryptocurrencies are “decentralized Ponzi schemes.” Still, he wrote in his annual letter to shareholders that “decentralized finance and blockchain are real, new technologies” and went on to tout his bank’s efforts.

Dimon has for months been warning of economic headwinds that could push the US and global economies into recession next year. He declined to make a specific prediction, saying in the interview that storm clouds “could be a hurricane, we simply don’t know.” JPMorgan benefited from the Federal Reserve’s rate hikes in the third quarter, reporting its highest quarterly net interest income ever.

--With assistance from Hannah Levitt.