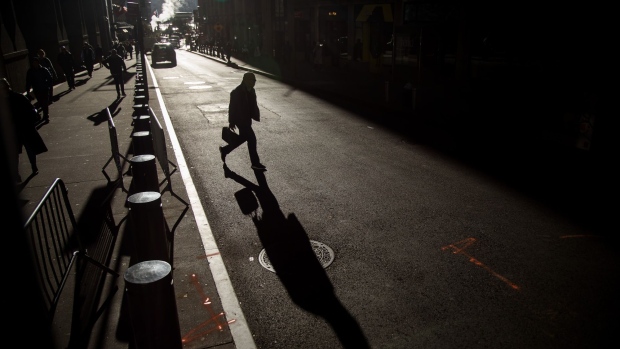 (Bloomberg) -- The growing consensus on Wall Street suggests 2023 is going to be ugly and investors are seeing that call play out in the bond market. However, while rates are sounding the alarm on the trajectory for growth next year, credit spreads are painting a very different picture, according to strategists at JPMorgan Chase & Co. and Charles Schwab.

“Where we’re seeing a lot of complacency is on the credit side,” JPMorgan’s Kelsey Berro said in a Bloomberg TV interview. “Spreads in high yield and investment grade still look very much like they are pricing in a soft landing... despite the fact that we have seen the most aggressive tightening cycle since the 1980s.”

Collin Martin of the Schwab Center for Financial Research echoed Berro on Bloomberg’s “The Open,” chalking it up to a higher quality ratings mix.

Despite the weaker quality corporates going back to the loan market, Berro is looking for spreads to widen should this recession materialize. It might not be the blowout historical models have primed investors for, “but for us, we want to be invested in fixed income,” the portfolio manager said.

“If you look at the upside for yields, it’s easy to point to that 800 basis points level as somewhere where high-yield spreads could rise as we enter a recession,” Martin said. “But maybe because of that higher-quality mix we really don’t get to that level.”

For now, JPMorgan is sticking to higher-quality parts of the credit market, looking for entry points into high yield as spreads fall more in line with the possibility of recession.

“In my mind, that is 600, 650, 700 basis points,” Berro said. “You’re stepping into those markets as they are widening, knowing that the all-in yield and the break even, the fundamentals, are going to support you.”

Charles Schwab highlights risks still remain in lower-rated parts of the market where investors searching for yield in the Federal Reserve’s easy money era were able to “attack markets.” The smaller companies with lower ratings that were able to issue debt in a zero-interest-rate-world don’t pose much of a threat alone. But taken in aggregate, they could emerge as a concerning headwind for the asset class.