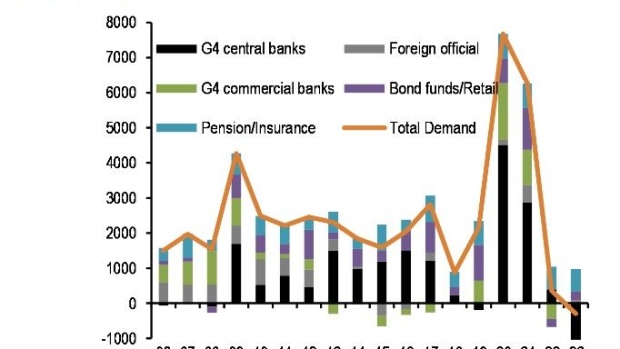 Investors have already broadly lightened positions in stocks and bonds during this year’s market mayhem, a move that’s limited the scope for more selling should the Fed hike rates to levels not seen in two decades, Panigirtzoglou says.

In what the firm’s clients consider as “Armageddon scenario” — one where the Fed would resume tightening after a brief pause with rates at 5% — the S&P 500 is likely to fall 10% and yields on 10-year Treasuries may add 50 basis points, his team’s model shows.

“Demand for both bonds and equities has already weakened by so much already in 2022,” Panigirtzoglou said in an interview. That’s “making it a lot less likely that a similarly big decline in demand could take place in 2023.”

The 6.5% rate scenario, one of the four that JPMorgan economists have laid out for next year, is seen as leading to a deep economic retrenchment. Other scenarios include the Fed cutting rates from mid-2023, rates peaking near 5% amid a mild recession, and the central bank succeeding in taming inflation without causing severe economic damage.

By the team’s estimate, net demand from institutional investors — pensions, mutual funds and hedge funds —  has shrunk by $2.1 trillion this year. In the bond market, demand has also collapsed, reaching the lowest level since at least 2006, and is expected to weaken further in 2023, the data show.

The analysis dovetails a contrarian bull case that says prevailing pessimism has set the stage for positive surprises. From retail traders to professional money managers, investors of all stripes have cut their risk appetite and sought safety in cash. In an interview with Bloomberg Television this week, Bank of America Corp. strategist Savita Subramanian advised investors to stay invested in stocks, in part because almost everyone is expecting another meltdown next year.

There are signs that equity investors have managed to cope with expectations of higher rates, according to Panigirtzoglou. Over the past seven months when bond traders raised bets on peak Fed rates to 5% from 3%, the S&P 500 has been largely flat.

“In a similar fashion another 150bp increase in the peak Fed pricing from here to 6.5% might prove more benign than feared for equities overall, even if expectations of economic hard landing in this risk scenario induce further underperformance of cyclical sectors,” Panigirtzoglou wrote in a note Wednesday.