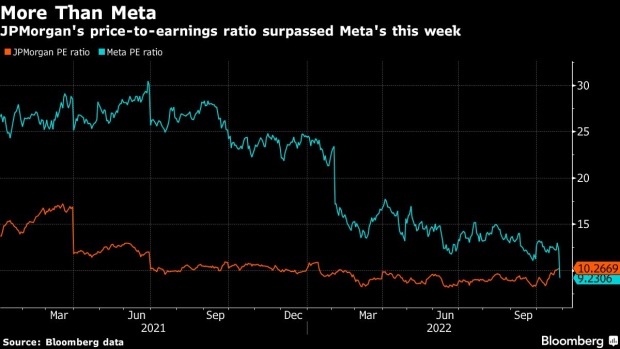 (Bloomberg) -- Wall Street leaders have spent the past decade making the case that they’re really running technology companies -- and that their stocks should fetch lofty Silicon Valley valuations. Suddenly, being a bank isn’t so bad.

JPMorgan Chase & Co., the nation’s largest lender, surpassed Meta Platforms Inc.’s market value this month for the first time since 2015. The bank was worth more than $365 billion by Thursday’s close of New York trading, overshadowing the social-media giant once valued at more than $1 trillion.

Even JPMorgan’s price-to-earnings ratio -- comparing the price of the company’s stock to its earnings per share -- is now higher than Meta’s in a sign that investors have more faith in the centuries-old lender’s ability to grow. JPMorgan traces its roots to 1799, while Facebook, which evolved into Meta, was founded in 2004.

Meta fell 25% Thursday after reporting disappointing third-quarter earnings. Tech stocks have fallen twice as hard as the finance sector this year, with the Nasdaq 100 Index down 31%, compared with the 15% decline for the S&P 500 Financials Index. Fintech valuations have taken a hit as well: Both PayPal Holdings Inc. and Block Inc. have fallen more than 70% from their all-time highs last year.

--With assistance from David Scheer.