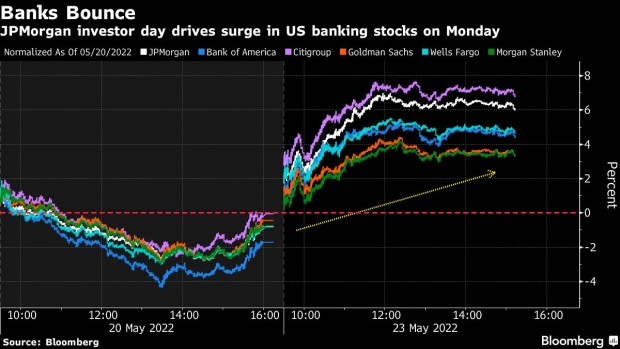 (Bloomberg) -- JPMorgan Chase & Co. is on track to end Monday with its biggest gain in 18 months after chief executive officer Jamie Dimon gave the country’s largest bank, and the US stock market, a boost with upbeat comments about the state of the economy.

Shares of the JPMorgan rose as much as 7.9%, the most since November 2020, making it the second best performing stock in the S&P 500 and among the biggest contributors to the 1.6% rally in the benchmark. Bank of America Corp., Wells Fargo & Co. and Citigroup Inc., which all gained at least 5% each, also helped fuel the market’s climb.

The KBW Bank Index climbed as much as 5.1% thanks to Dimon’s sanguine comments, an increased forecast for net interest income excluding its markets business and a steady expense outlook.

Wells Fargo banking analyst Mike Mayo said in a note to clients that the biggest takeaway from JPMorgan’s gathering is that it shows there’s “no recession imminent.” The presentation was bullish for the company and “even more so for the industry,” he added.

Bank shares have been under extensive pressure this year as worries that an aggressive series of interest rate hikes by the Federal Reserve could plunge the US economy into a recession. The KBW Bank Index has fallen about 25% since hitting a record high in early January.

JPMorgan has been the worst hit among the biggest banking stocks. While Monday’s surge has helped erase some of the decline this year, the lender is still down nearly 21%, making it the worst performing big bank stock. Still, analysts have not given up on the company, with the average 12-month price target forecasting a 23% gain, near the highest its been since the pandemic began.

Monday’s push higher also helped boost sentiment across US equity markets. The S&P 500 Financials Index was the best performing sub-gauge on the day with JPMorgan accounting for more than 4% of the overall market’s rise. Meanwhile, Citigroup, Bank of America and Wells Fargo were all among the top gainers.

(Updates to include broader market trading, pricing throughout.)