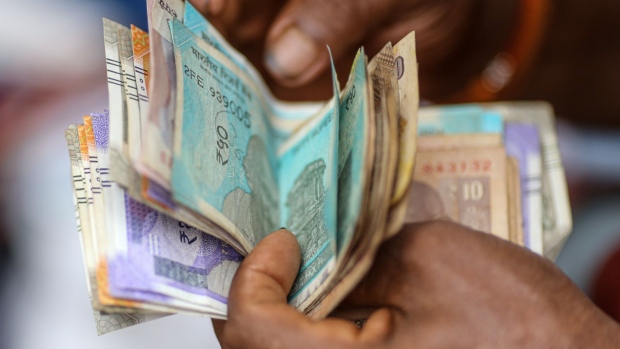 A delivery worker counts Indian rupee banknotes in Mumbai, India, on Wednesday, July 20, 2022. The rupee slid to all-time low of 80.06 per dollar on Tuesday, and has lost 2.4% over the past month, the third-worst performing Asian currency over the period. Photographer: Dhiraj Singh/Bloomberg , Bloomberg

(Bloomberg) -- JPMorgan Chase & Co. is keeping Indian government bonds off its emerging-market sovereign bond index for now, citing investment hurdles that must be resolved for the inclusion to take place.

The decision to refrain from adding the bonds to the JPMorgan Government Bond Index-Emerging Markets -- while keeping them under review for inclusion -- was based on investor feedback, the index provider said Tuesday.

“Investors cited investment hurdles that need to be resolved, including a lengthy investor registration process and the operational readiness required for trading, settlement and custody of assets onshore,” the team led by the firm’s global head of index research, Gloria Kim, said in a statement.

Last month, India ruled out any change to tax policies to make it easier for its bonds to be included in global indexes, Bloomberg reported, citing people familiar with the matter. The government wanted to be self-reliant in its funding, was concerned foreign inflows would increase market volatility and didn’t plan to waive capital gains taxes -- a stumbling block in previous negotiations, they said.

India Unwilling to Bend for Index Inclusion to Bring in Billions

The country’s debt will remain on watch for index inclusion and will continue to fall under the so-called Fully Accessible Route, or FAR, JPMorgan said. FTSE Russell kept the nation’s bonds on index watch in its review last week.

The announcement is expected to weigh on market sentiment, disappointing investors who expected the bonds to be finally included in the bank’s key gauges -- a move that would have made it easier for overseas investors to put their money into Asia’s third-biggest economy with its $1 trillion government debt market. Expectations for index inclusion had surged after Morgan Stanley last month said the index provider was consulting investors for a possible change after Russia’s removal due to the war in Ukraine.

Renewed speculation surrounding index inclusion contributed to about 40 billion rupees of inflows into the FAR bonds in September, following a 42 billion rupees-inflow in August, the biggest amount in seven months. The yield on benchmark 10-year bonds eased more than 20 basis points since this year’s high reached mid-June amid index-inclusion optimism.

Any inclusion into JPMorgan’s index may be delayed to early next year, Reuters reported on Sept. 27, citing people it didn’t name.

“Euphoria in the market was because the index review was happening,” said Rajeev Pawar, head of treasury at Ujjivan Small Finance Bank Ltd. in Mumbai. “We expect, maybe, in the February budget some announcements to come. Then, maybe index inclusion to follow after that.”

JPMorgan cited several areas that investors found problematic with Indian bond markets, including the three- to six-month registration timeline for investors to set up new accounts. Investors also highlighted delays -- especially around monthly and quarter-end rebalancings -- in the repatriation of proceeds from bond sales beyond the settlement period, typically tied to tax liability snafus, the indexer said. There was also some risk tied to the failure of onshore bond trades that fail to be matched on the same day, according to the firm’s investor feedback.

“We will continue to engage with the regulators and market participants, and gather feedback on sufficient resolutions for the remaining hurdles,” JPMorgan’s Kim said.

Bloomberg LP is the parent company of Bloomberg Index Services Ltd, which administers indexes that compete with those from other service providers.

(Updates with context on government concerns and potential delay timeline.)