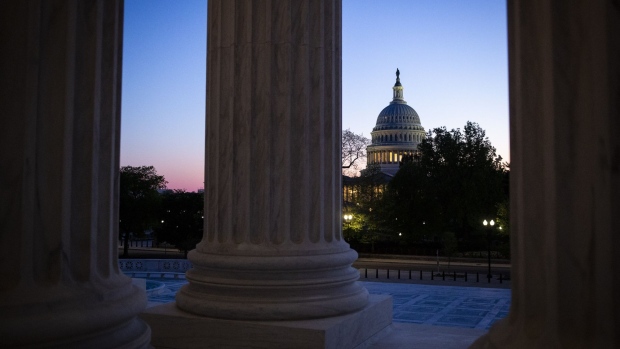 The U.S. Capitol stands past columns of the U.S. Supreme Court at dusk in Washington, D.C., U.S., on Thursday, April 16, 2020. President Donald Trump threatened Wednesday to try to force both houses of Congress to adjourn -- an unprecedented move that would likely raise a constitutional challenge -- so that he can make appointments to government jobs without Senate approval. , Bloomberg

JPMorgan Chase & Co. joined Goldman Sachs Group Inc. economists in dropping forecasts for U.S. economic growth in coming months thanks to the failure of Republicans and Democrats to seal a fiscal-stimulus deal.

“We are further lowering odds of getting the US$1-1.5 trillion in additional stimulus that had seemed quite likely as recently as July,” Michael Feroli, JPMorgan’s chief U.S. economist, wrote in a note Thursday.

While both House Speaker Nancy Pelosi and Treasury Secretary Steven Mnuchin on Thursday indicated openness to restart talks on a package that have been stalled since early August, there’s no indication either side is ready to change its most recent negotiating position.

“The numbers being discussed today indicate that the two sides remain quite far apart,” Feroli wrote, while noting there’s still a chance an agreement is “snatched from the jaws of defeat.”

JPMorgan now sees 2.5 per cent annualized economic growth in the fourth quarter of 2020, down from 3.5 per cent in an earlier estimate. The bank also trimmed first-quarter growth to 2 per cent from 2.5 per cent.

Goldman researchers led by Jan Hatzius earlier halved their estimate for the fourth quarter of 2020, to 3 per cent.

“It is now clear that Congress will not attach additional fiscal stimulus to the continuing resolution,” the Goldman analysts said in a report, referring to a stopgap funding bill to keep the government operating past Sept. 30. “This implies that after a final round of extra unemployment benefits that is currently being disbursed, any further fiscal support will likely have to wait until 2021.”

The withdrawal of stimulus will reduce disposable income to the pre-pandemic level, weighing on consumer spending, the Goldman analysts said.

Slower growth will leave “more room for catch-up later,” however. This means Goldman now sees the economy growing 5.8 per cent in 2021 after a 3.5 per cent contraction this year.

JPMorgan forecasts 2.3 per cent year-on-year growth in 2021, after a 4.2 per cent decline in gross domestic product this year.

A “blue wave” of Democratic wins in the November election for the presidency, House and Senate would see a larger fiscal impulse to demand in 2021, Feroli said.