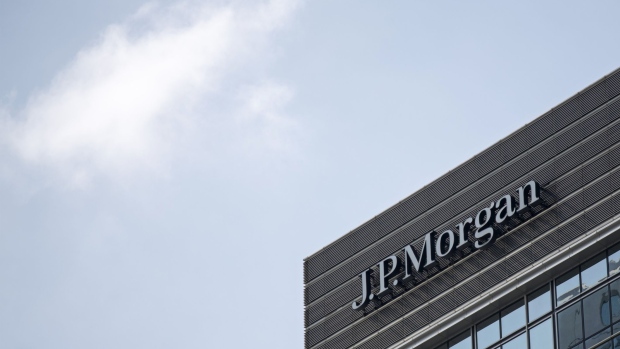 Signage for JPMorgan Chase & Co. is displayed atop Chater House in the central business district of Hong Kong, China, on Thursday, Aug. 29, 2013. A probe of JPMorgan hiring practices in China has uncovered red flags across Asia, including an internal spreadsheet that linked appointments to specific deals pursued by the bank, people with knowledge of the matter said. Photographer: Jerome Favre/Bloomberg , Bloomberg

The New York-based lender sold US$1 billion in green bonds maturing in four years, according to a person with knowledge of the matter. The offering yields 0.48 percentage points above Treasuries, after initial discussions of around 0.65 percentage points, said the person, who asked not to be identified as the details are private. JPMorgan was the sole manager of the bond sale.

Proceeds will be used to fund eligible sustainable projects, which may include green buildings and renewable energy, according to Sustainalytics’ second-party opinion. The bank halted advising or lending to companies that get most of their revenue from extracting coal earlier this year and said it was planning to exit existing credit exposure to those companies by 2024 as part of its sustainability commitments.

JPMorgan joins other top Wall Street banks that have sold debt to finance green or social projects. In May, Citigroup Inc. raised US$1.5 billion with a dollar-denominated green bond for the first time while Bank of America Corp. priced a US$1 billion issue to fund Covid-19 relief efforts, the first sale from a U.S. financial institution that explicitly links all proceeds to tackling the virus.

“JPMorgan is clearly being opportunistic given the growing demand in the green bond market, but if they’re committed to investing in legitimate green and social causes as they seem to be here, then we don’t mind them being opportunistic,” said James Rich, senior portfolio manager of sustainable fixed income at Aegon Asset Management, which had about US$408 billion in global assets as of June 30. “It’s a win-win for them and the environment and society.”

Companies and governments have raised to date a record US$140.4 billion globally in green bonds this year, compared to about US$129.4 billion in the same period last year, according to data compiled by Bloomberg. The financial sector has sold US$43.2 billion in green notes this year, making it the largest issuer after governments.