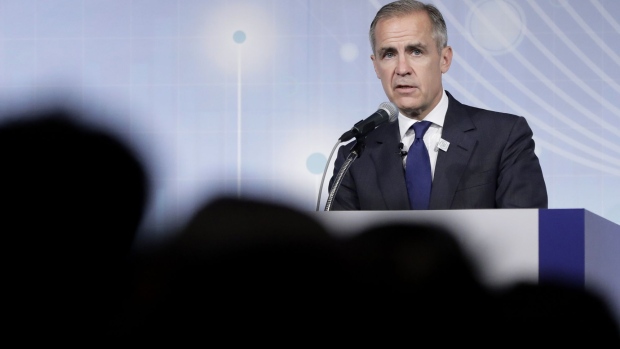 Mark Carney, governor of the Bank of England (BOE), speaks during the Task Force on Climate-related Financial Disclosures (TCFD) Summit in Tokyo, Japan, on Tuesday, Oct. 8, 2019. Carney said Japan is already at the sharp end of a new pattern of devastating extreme weather with ferocious typhoons and record breaking heat waves. , Bloomberg

(Bloomberg) -- Money appeared to be no object when Mark Carney, the former central banker, brought together financial firms managing more than $130 trillion of assets behind a pact to rapidly slash greenhouse gas emissions.

“We have all the money we need for the transition,” he declared at last year’s United Nations climate summit.

Now it appears some of the giant banks that initially supported the Glasgow Financial Alliance for Net Zero are wary about meeting tougher climate requirements. Several big firms that lent their names to the initiative, including JPMorgan Chase & Co., Morgan Stanley and Bank of America Corp., are having second thoughts and may walk out, according to people familiar with the matter. Others such as Banco Santander SA will stay but have become disgruntled, the people said.

Carney sided with the banks on Wednesday. At a United Nations Climate Action summit co-hosted by Bloomberg Philanthropies, he said members of GFANZ need guidance on matters such as appropriate decarbonization paths for certain industries. “What they can't have is legally binding strictures,” Carney said. Race to Zero, the UN-backed net-zero project that underpins GFANZ, recently put forward what Carney described as strictures “which went too far.”

The banks’ misgivings surfaced at recent meetings after Race to Zero completed its annual review and then in June issued more stringent decarbonization targets. Among them was an explicit requirement “to phase down and out unabated fossil fuels, including coal.” Existing members of the coalition were given one year to comply or face expulsion; new members were required to immediately align.

The guidelines sparked concerns, primarily among banks and insurers, that the stricter requirements would leave them vulnerable to lawsuits, particularly in the US where some states effectively require lenders to finance coal. Banks also are wary about potential antitrust issues, according to a person familiar with the matter.Spokespeople for JPMorgan, Morgan Stanley, Bank of America and Santander declined to comment. Read more: Banks May Leave Mark Carney’s Climate Group on Legal Risks

With the war in Ukraine prompting a global energy crisis, the banks that have pledged to decarbonize their portfolios and lending books to support efforts to limit global warming now face a quandary as demand for fossil fuels increases. At the same time, leading US Republicans are rejecting initiatives aimed at tackling climate change.

It's a worrying sign of potential backsliding on climate goals by private-sector players whose pledges stood as one of the notable achievements around last year's UN climate conference in Scotland—underscored this week by a warning from Secretary-General António Guterres: “Climate action is being put on the back burner.”

To address potential legal issues, Race to Zero updated its language on Sept. 16 and emphasized that members must “independently find their own route” to the 1.5 degrees Celsius-aligned climate goal and do so by following the “most appropriate” science-based pathway. The underlying criteria are essentially unchanged, said  Fiona Macklin, Race to Zero’s campaign manager, in an interview.

“The substantive requirements remain the same,” she said. “Race to Zero still requires members to phase down and out all unabated fossil fuels, including coal. It's very clear that members have always needed—and still need—to align with 1.5° scenarios.”

GFANZ members have until next year to adhere to the updated criteria, Macklin said. “If they persistently fail to comply, then we'd work with partners to have them removed from the campaign,” she said.

Still, some banks contend that the initial changes to Race to Zero’s guidance were tantamount to moving the goalposts, said two people familiar with the matter. Concerns also were raised that the coal phase-out language was too aggressive and a coordinated stance on coal might bring with it antitrust problems.

GFANZ is the biggest-ever finance sector coalition for climate change. The struggles inside the alliance illustrate how the PR dividend gained from joining the group and making big statements about climate initiatives are now being weighed against the realities of a world that suddenly wants more fossil fuels—not less.

Carney, 57, started organizing GFANZ about a year after he stepped down as governor of the Bank of England in March 2020. The group was unveiled in April 2021 when banks, including Citigroup Inc. and UBS Group AG, pledged to align emissions from their lending and investment portfolios with pathways to net-zero emissions by 2050 or sooner. The organization announced at COP26 in Glasgow that Michael Bloomberg, majority owner of Bloomberg LP, the parent of Bloomberg News, would serve as co-chair alongside Carney.

GFANZ's seven sub-groups, which are comprised of asset owners to asset managers, are mostly made up of European and North American firms. The coalition of alliances has taken steps this year to increase its presence and reach in the emerging world, where most climate finance is needed, by creating regional networks in Africa and the Asia-Pacific region.

To support its overarching mission of driving all of finance towards net-zero carbon emissions, GFANZ has developed and consulted on several tools to enable firms to measure climate risks and assess progress on decarbonization. For example, the group has been developing a framework to help members cope with stranded assets, mechanisms to evaluate transition plans and tools to measure the level of global warming implied by investor portfolios. On Thursday, GFANZ published a report giving guidance on how companies can develop credible net-zero transition plans.

The fact that several major signatories are getting cold feet is a worrying indicator, according to Rebecca Self, a climate consultant who previously ran HSBC Holdings Plc's sustainable finance business. It suggests that some of them were playing along without any serious resolve to follow through, she said.

“The posturing from the banks reveals the difference between the say-ers and the do-ers when it comes to net zero,” Self said. “It requires more than an initial commitment and nice words.”

With COP27 just two months away, the role of private-sector finance firms will again be in the spotlight again. While a big focus of this year's event will be on getting rich nations to deliver on promises to pay $100 billion a year in climate aid to poorer countries, the need for banks and asset managers to play their part in finding the trillions needed for the energy transition will be on the agenda.

For James Vaccaro, a former renewables banker who leads the Climate Safe Lending Network and sits on GFANZ’s advisory board, the possible exit of institutions such as JPMorgan and Bank of America may actually be a good thing.

“If we are driving closer to the cliff edge on climate change, then we only need” members that are dedicated to climate action, he said. Removing those that are “a quarter-hearted at best on net zero” might serve to “unlock a little more enthusiasm and energy from those who do want to race to the top.”

In the end, “rather than no one left behind, we might need to leave some behind,” Vaccaro said.

(Adds report from GFANZ in 17th paragraph and comment from James Vaccaro in final paragraph.)