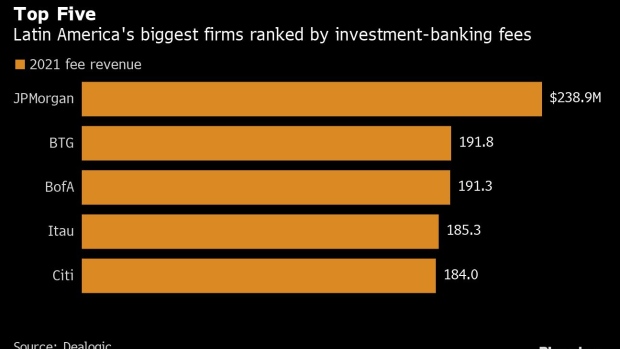 (Bloomberg) -- JPMorgan Chase & Co., which raked in more investment-banking fees in Latin America than any of its competitors last year, plans to hire more than 500 people in the region as it gains market share and builds on its success in acquisition finance.

“With the exception of fixed-income markets, we had the best year ever in 2021 for all the businesses we have in Latin America,” Alfonso “Poncho” Eyzaguirre, who’s been the bank’s chief executive officer for Latin America and Canada since March, said in an interview. “And we want to continue growing.”

While JPMorgan took the No. 1 spot in fees from the region last year, other Wall Street banks have also been benefiting from strong venture-capital investments in technology firms and strength in Brazil’s equity capital markets. Goldman Sachs Group Inc. said it had a record year in asset management, global markets and investment banking.

JPMorgan’s hiring plans for the next three years are centered mainly in its Buenos Aires hub. The 500 new hires will add to the bank’s current 3,850 employees based in six Latin American nations: Chile, Colombia, Peru, Argentina, Brazil and Mexico, according to Eyzaguirre, who is also the head of Latin America investment banking. Priorities include payments, in which the bank is investing heavily, as well as wealth and asset management, he said. The company has local brokerage firms in Brazil, Mexico and Chile.

With $239 million in revenue, JPMorgan rose to first place from second on fees from advising on mergers and acquisitions and for equity and debt underwriting in Latin America and the Caribbean, according to London-based research firm Dealogic. The region’s total fee pool surged 50% from 2020 to $2.17 billion, the most since the record $2.68 billion in 2007, Dealogic said.

“Brazil was the driving force behind the increasing volumes in the region, representing two-thirds of the investment-banking wallet, and we were able to gain market share there even considering the presence of very strong local competitors,” Eyzaguirre said.

It also participated in a $1.5 billion bridge loan and a $500 million letter of credit to MC Brazil Downstream Participacoes SA, a unit of the Abu Dhabi sovereign fund Mubadala Investment Co., when it acquired the Landulpho Alves Refinery from Petroleo Brasileiro SA. The bank was among coordinators on a $1.8 billion project bond guaranteed by the firm.

JPMorgan is also aggressively investing in fintechs in the region. The New York-based bank agreed in June to buy a 40% stake in Brazil’s C6 Bank after acquiring a minority stake in FitBank Pagamentos Eletronicos SA a year earlier.

“For 2022, we believe the region will have a challenging year, as Covid is not going away, the Fed is expected to taper and raise rates, local central banks are also increasing rates, and we will have our own idiosyncratic Latin America issues, mostly on the political front,” Eyzaguirre said.

Brazil’s presidential election in October and Colombia’s vote in May, as well as a proposal to change the constitution in Chile, are expected to raise volatility, he said.

Even if the equity capital markets in Brazil shrink, private equity investors may want to increase their exposure in the nation, according to Eyzaguirre. “With diversification in businesses and geographies, you can weather these cycles and do well,” he said.

Mexico, for example, is a “sleeping giant” that will recover its relative importance in Latin America’s investment-banking industry after representing just 11% of the fee wallet in 2021, a small share relative to the size of its economy, Eyzaguirre said.

“The tech industry is emerging there,” he said. “We are hoping to see something similar to what happened in Brazil, where it exploded.”

“We are hiring a dedicated technology team in Argentina to accelerate the deployment of onshore payments capabilities in Latin America,” said Eyzaguirre, who is also member of the JPMorgan’s global corporate and investment bank operating committee.

The bank is also planning to bring additional asset-management products to Latin America, mainly exchange-traded funds, and is signing additional contracts with local distributors and using its own channels, he said.

About 450 of the new hires will be for the hub in Buenos Aires, where JPMorgan already has 2,400 employees serving the corporate- and investment-banking functions globally.

Latin America “is volatile, but it’s dynamic with a ton of opportunities,” Eyzaguirre said.