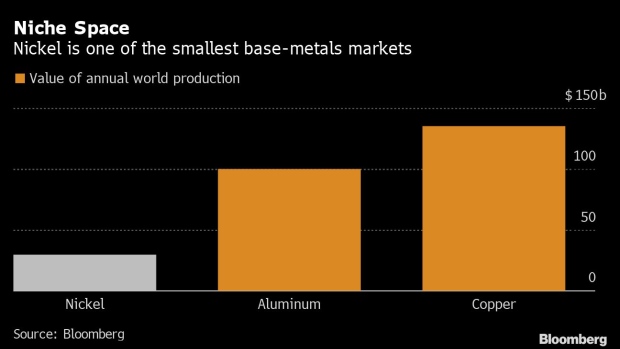 JPMorgan Chase & Co. made about $100 million trading nickel last year, according to people familiar with the situation, as it benefited from a price spike on the back of a Chinese-led supply squeeze.

The blowout year in nickel underscores JPMorgan’s growing dominance in a corner of the commodities markets that rivals have retreated. The bank has become the go-to financier for big deals in base metals, from the Chinese nickel purchases that sparked last year’s price surge, to hedging transactions for carmakers, which need the metal for electric-vehicle batteries.

Nickel, usually a niche market dominated by stainless steel mills, became the world’s hottest metal in 2019 when prices jumped by two-thirds in a matter of months.

At first, the moves were spurred by news of a looming ore-export ban in Indonesia. But prices really took off as top stainless steelmaker Tsingshan Holding Group Co. withdrew large amounts of nickel stocks on the London Metal Exchange, spurring worries about a supply squeeze.

JPMorgan was among the banks that helped finance the Chinese company’s purchases, Bloomberg reported at the time. While those transactions weren’t a major profit driver, separate positions connected to long-term hedging deals with automakers became lucrative for the bank as the market rallied, the people said.

Its central role in both trades is emblematic of how JPMorgan has become a crucial facilitator in base metals markets after other banks left. Goldman Sachs Group Inc. and Societe Generale SA were among the latest to scale back.

Measured by its open positions, JPMorgan is frequently the largest dealer on the London Metal Exchange, according to people familiar with the matter.

The gains in nickel helped fuel a 13% jump in the firm’s overall fixed-income trading revenue, a division that includes commodities, to $14.4 billion in 2019, the most among global investment banks.

Nickel accounted for about half the trading revenues of JPMorgan’s base metals team last year, while the commodities division as a whole took in about $1 billion, the people said. JPMorgan doesn’t publicly report the results of its commodity trading business.

The bank’s exceptionally high profit from trading nickel -- one of the smallest base metals markets -- is raising the profile of its head nickel trader, Daniel Amsbury, known by the nickname “Disco” in the tight-knit London metals market.

To contact the editor responsible for this story: Lynn Thomasson at lthomasson@bloomberg.net