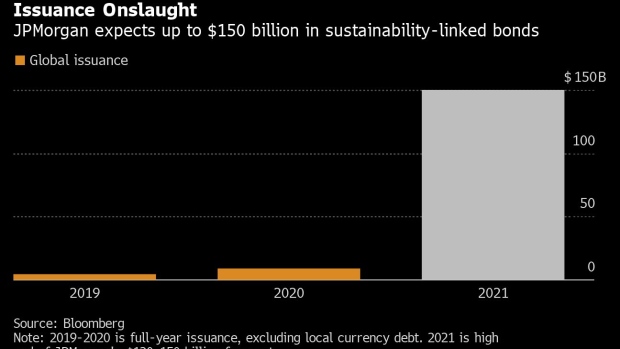 (Bloomberg) -- Debt that rewards borrowers for hitting environmental or social targets is the next frontier for sustainable finance, according to JPMorgan Chase & Co, which predicts an issuance surge this year.

“2021 will be the year of sustainability-linked bonds,” said Marilyn Ceci, global head of ESG debt capital markets at JPMorgan. “It’s going to be the fastest-growing sustainable instrument that we have if we extrapolate what we’ve seen already.”

Global sales of the bonds could be between $120 billion and $150 billion by the end of this year, boosted by strong demand from investors, Ceci said in an interview. That compares with $8.9 billion of issuance in 2020, excluding local currency debt, according to data compiled by Bloomberg.

This year has already seen about $4 billion of SLB issuance, close to what was sold in all of 2019, when the securities were first introduced. JPMorgan is the biggest underwriter of the bonds, according to a ranking compiled by Bloomberg.

Overall, Ceci expects the sustainable finance market to grow by 49% by end of this year, a boost from a forecast of about 30% made in October.

SLBs are gaining popularity with issuers embracing the Paris Agreement on climate change that want flexibility in how they use the proceeds.

Unlike traditional sustainability bonds for specific projects, SLBs can be used to fund just about anything, though a borrower pledges to hit a social or environmental target, such as cutting carbon emissions by a specific amount. That can be a good option for companies with no particular project to finance but a general desire to make their businesses more sustainable.

Green bonds -- the largest category of sustainable debt by dollar volume -- will continue to grow, though at a slower pace, partly because of competing structures like SLBs, said JPMorgan’s Ceci.

Italian utility Enel SpA was the first SLB issuer, raising $1.5 billion in September 2019. The borrower has to hit a target of 55% renewable installed capacity by the end of this year or pay 25 basis points more for the debt.

The International Capital Market Association released guidelines in June to promote SLB transparency, which may boost issuance. While the principles are voluntary, similar rules for green and social bonds have been embraced by borrowers and investors. Brazilian paper producer Suzano SA was the first to issue SLBs after the ICMA guidelines, according to BloombergNEF.

Investors worry that borrowers could use an eco-friendly SLB tag for marketing without having any real impact. In some cases, the penalty for not hitting targets “isn’t meaningful enough to matter,” said James Rich, senior portfolio manager of sustainable fixed income at Aegon Asset Management. The sustainability “‘link’ is weak at best,” said Rich.

Borrowers could also set overly easy targets, including goals that may have already been achieved. And some SLBs are callable at the same time as targets are due, leaving issuers free to retire the debt to avoid a penalty.