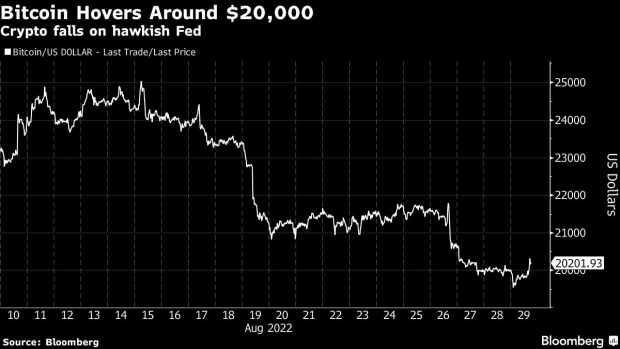 David Kelly, chief global strategist of JPMorgan Funds Ltd., speaks during a Bloomberg Television interview in New York, U.S., on Tuesday, May 21, 2019. Kelly discussed the history behind China's commitment to winning a trade war with the United States. , Bloomberg

(Bloomberg) -- JPMorgan Asset Management’s David Kelly has some words of advice for investors rattled by a hawkish Federal Reserve: forget about short-term direction and focus on valuations.

Fed Chair Jerome Powell sent equity markets into a tailspin Friday after he reiterated that the central bank is willing to raise rates and keep them higher for longer to tame inflation, even at the risk of an economic downturn. That quashed hopes of a dovish pivot anytime soon, a view that helped fuel bets this year’s bear market is over.

“The economy has got one foot into a recession and the other on the banana peel now,” the chief global strategist said in an interview Friday after Powell’s speech at Jackson Hole, Wyoming. Given this backdrop, the best way to be positioned now is to look at valuations.

“Make sure you overweight US and international value, as well as stocks with relatively low price-to-earnings ratio,” he said.

Markets have been on a roller-coaster ride this year, falling on fears tightening monetary policy to rein in inflation running at the fastest clip in four decade would dip the economy into recession. Bulls took solace in prospects for inflation peaking, the Fed slowing the pace of rate hikes and a soft landing.

Those fears and hopes have been reflected in the performance of value versus growth stocks, with former outperforming in the first half of this year, while growth has generally performed better since then. After Powell’s remarks Friday, value has again grabbed the pole position again.

Bitcoin briefly traded below $20,000 on Monday and the meme-stock ETF (ticker MEME) has fallen roughly 20% since mid-August, hovering around late July lows.

Kelly expects more volatility and a high risk of a recession. But by the end of next year the economy “will feel more normal.” But the real question is “how much damage the Fed wants to inflict to this economy?”

“The Federal Reserve is overestimating the strength of the US economy as it feels guilty about the fact that inflation went up under their watch,” he said.