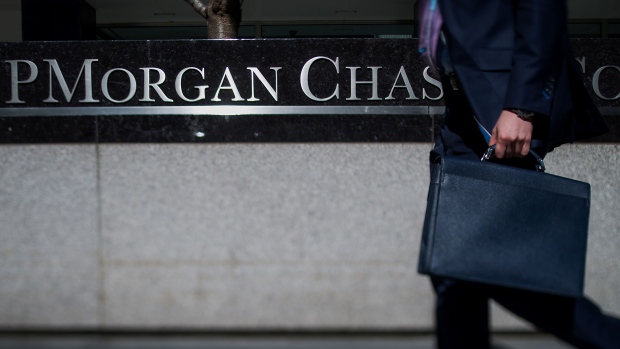 (Bloomberg) -- U.S. authorities that accused six JPMorgan Chase & Co. employees of rigging precious-metals futures are building a criminal case against the bank itself, two people familiar with the situation said.

The previously unreported investigation of the global bank’s parent company, part of a wide-ranging federal clampdown on market manipulation, raises the prospect of criminal charges and significant fines against America’s largest bank.

No formal accusations have been made against JPMorgan. A bank spokeswoman, Jessica Francisco, declined to comment and pointed to company filings from last year disclosing that the Justice Department’s Criminal Division was investigating “trading practices in the metals markets and related conduct.”

How the probe proceeds from here is likely to be watched closely. Relatively few big-bank prosecutions have come to light during the Trump administration, compared with a spate of big penalties and guilty pleas for banks under President Barack Obama. The Justice Department declined to comment.

Investigators at the Justice Department and the Commodity Futures Trading Commission are at least two years into their examination of trading on JPMorgan’s precious metals desk, one of the people said. U.S. authorities have already charged bank traders who worked in New York, London and Singapore with manipulating thousands of orders for gold and silver futures to benefit the bank and its major hedge fund clients.

Their campaign of manipulation and spoofing -- placing orders and then canceling them to trick other market participants -- spanned a decade, prosecutors said.

Although other suspected market cheats have been charged with specific spoofing and manipulation offenses, the Justice Department accused JPMorgan metals traders under the so-called RICO statute -- a criminal racketeering law more commonly applied to mafia cases than global bank probes.

Authorities are conducting a similar racketeering investigation of a second financial firm involving spoofing, according to a third person familiar with the matter.

RICO allows for prosecutors to charge multiple criminal acts involving a group of people in the same case as long as they were part of the same enterprise. The Justice Department said the racketeering conspiracy on the JPMorgan metals desk ran between March 2008 and August 2016. Two former metals traders for the bank have pleaded guilty to fraud charges and are cooperating with authorities.

Among those fighting charges are Michael Nowak, who remained active as the global head of JPMorgan’s precious metals desk until he was indicted under seal in August.

After the arrest of Nowak and two others in September, Assistant Attorney General Brian Benczkowski said investigators would “follow the facts wherever they lead, whether it’s across desks here or at any other bank or upwards into the financial institution.”

It isn’t the first time the bank’s trading operations have come under the scrutiny of prosecutors: In 2015, JPMorgan pleaded guilty to felony antitrust charges along with a handful of other global banks that paid penalties and admitted to conspiring to rig the price of U.S. dollars and euros. JPMorgan agreed to pay $550 million, but it and other global banks in the settlement felt little lasting hit from markets or customers, undercutting investor fears that a guilty plea would devastate their business.

Even so, federal prosecutors could attempt to use the earlier market-manipulation plea as leverage in settlement negotiations if they can argue that the bank is a repeat offender.

In addition to the anti-racketeering statute, prosecutors are relying on wire-fraud laws to target alleged spoofing that occurred before it became specifically outlawed in 2011. Wire fraud, when perpetrated against a financial institution, is subject to a 10-year statute of limitations, compared with five for spoofing. A federal judge in Chicago recently ruled that the charge could be used in a case against two former Deutsche Bank AG traders.

To contact the reporters on this story: Tom Schoenberg in Washington at tschoenberg@bloomberg.net;Liam Vaughan in London at lvaughan6@bloomberg.net