Big Call: Analysts are too pessimistic on earnings

JPMorgan Chase & Co. strategists believe analysts are starting 2020 with an overly negative outlook on earnings and say positive surprises will give a boost to global equities.

Forecasts for the S&P 500’s earnings growth over the next two reporting seasons are below those seen in the second and third quarters of last year and are likely “too low,” JPMorgan strategists led by Mislav Matejka wrote in a note on Monday. Typically, fourth-quarter earnings are three per cent to four per cent higher than in the second quarter, instead of lower, they said.

“As the year progresses, the optimistic earnings growth forecasts by the sell-side analysts would tend to be downgraded, but crucially without an adverse effect on stocks performance,” the strategists wrote. “What is much more unusual is that the EPS projections for the next two reporting seasons might be too low.”

Global profit downgrades have been outpacing upgrades every week since April, according to Citigroup Inc.’s global earnings revision index, reflecting analysts’ concerns about the impact of trade wars and slower economic growth. This failed to derail a powerful rally in both U.S. and global equities last year thanks to the continuation of monetary easing by central banks and appealing valuations. 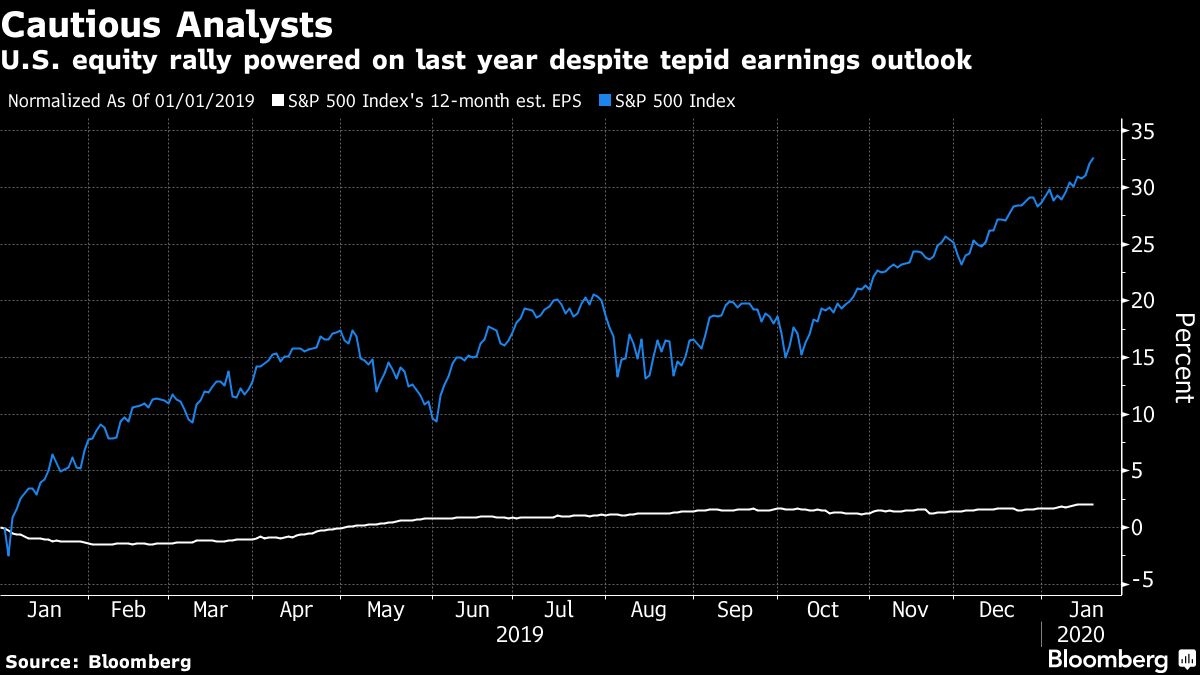 One year ago, JPMorgan’s Matejka recommended being overweight U.S. equities within developed markets, citing better earnings growth relative to the rest of the world. His call turned out to be prescient as the S&P 500 soared 29 per cent in 2019, beating a 25 per cent jump in the MSCI World Index. At the end of September, Matejka reduced his preference for U.S. stocks in favor of euro-area equities.

Although U.S. companies have just started reporting earnings, results so far are “encouraging,” with 28 S&P 500 firms posting three per cent profit growth from a year earlier, according to JPMorgan. Looking back at the last three reporting seasons, which saw US$1 to US$2 upgrades coincide with a rally in equities, the strategists believe a similar scenario will play out again.

Corporate earnings are likely to benefit from a potential peak in the dollar and a subsequent gain in commodity prices, they said. Macro data is also key to the success of profit reports, and the deceleration in global Purchasing Managers’ Index momentum is likely to stop and turn into an acceleration in the coming months, boosting earnings, according to JPMorgan.

Among sectors, the strategists say commodity and luxury firms as well as semiconductors could beat earnings expectations, while staples may lag.