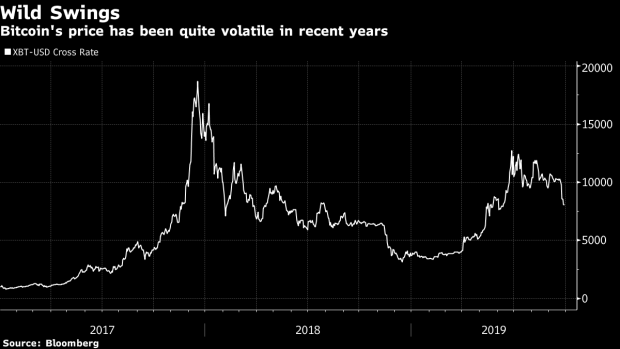 (Bloomberg) -- Bitcoin’s 20% drop earlier this week was likely fueled by the effect of Intercontinental Exchange Inc.’s new futures contracts and an unwinding of long positions, according to JPMorgan Chase & Co.

The cryptocurrency’s plunge, its biggest in a week since last November, took it from around $10,000 to a close Friday of $8,061. Though the strategists led by Nikolaos Panigirtzoglou were quick to point out that the introduction of physically delivered futures was a further step to maturity for the market, they said it probably depressed prices.

Read: Bitcoin Falls Below $8,000 for First Time Since June

“It may be that the listing of physically settled futures contracts (that enables some holders of physical Bitcoin e.g. miners to hedge exposures) has contributed to recent price declines, rather than the low initial volumes,” JPMorgan said in the report dated Friday.

Numerous crypto-market watchers have cited lower-than-expected volumes for the ICE futures contract as a likely contributor to this week’s drop. Other suggestions included concern about difficulty getting U.S. approval for Bitcoin-related exchange-traded funds, and pressure around technical levels.

Panigirtzoglou and colleagues noted that they have in the past seen Bitcoin price peaks coinciding with overbought conditions. Using proxies to analyze positioning by futures traders, they said the long base in CME contracts appears to have declined “markedly” from its peak a couple of months ago with some further reduction this week. The Bitmex position proxy suggests a “more marked capitulation” of Bitcoin longs over the past week, they said.

“This position liquidation has also likely contributed to the sharp falls in Bitcoin prices this week,” the strategists said, adding a final note of caution: “While the previous overhang of long Bitcoin futures positions appears to have cleared in Bitmex futures, this is not yet true for CME contracts.”

To contact the editors responsible for this story: Christopher Anstey at canstey@bloomberg.net, Marthe Fourcade, James Amott