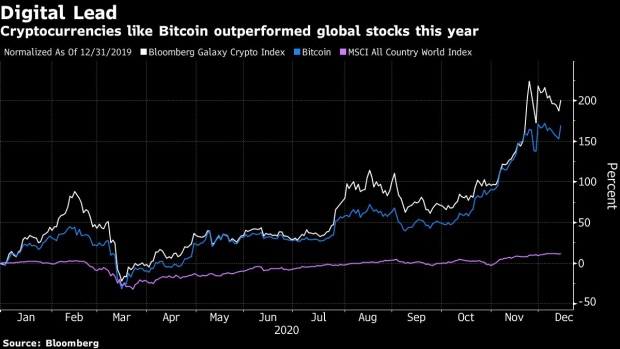 (Bloomberg) -- A recent investment in Bitcoin by Massachusetts Mutual Life Insurance Co. highlights the potential for additional institutional demand for the cryptocurrency in coming years, according to JPMorgan Chase & Co.

The $100 million purchase suggests adoption of Bitcoin is spreading from family offices and wealthy investors to insurance firms and pension funds, strategists including Nikolaos Panigirtzoglou said in a note Friday. The latter two are unlikely to ever make high allocations, but even a small shift toward the cryptocurrency could be significant, according to the strategists.

“MassMutual’s Bitcoin purchases represent another milestone in the Bitcoin adoption by institutional investors,” the strategists said. “One can see the potential demand that could arise over the coming years as other insurance companies and pension funds follow MassMutual’s example.”

Bitcoin has dipped after hitting a record at the start of December but remains in sight of the $20,000 level, which it has yet to reach. Proponents argue the cryptocurrency is gaining more recognition as a portfolio diversifier amid dollar weakness, somewhat akin to gold. Others remain wary of such grand claims since the crypto world is prone to high volatility and bouts of scandal.

If pension funds and insurance companies in the U.S., euro area, U.K. and Japan allocate 1% of assets to Bitcoin, that would result in additional Bitcoin demand of $600 billion, the strategists said. The cryptocurrency’s current market capitalization is about $356 billion, according to CoinMarketCap.

At the same time, traditional investors like insurers and pension portfolios face regulatory hurdles relating to risk levels and liability mismatches, likely limiting how much they can put into Bitcoin, the JPMorgan strategists wrote.