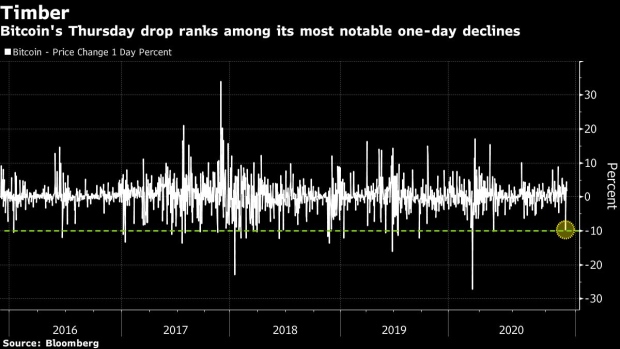 Momentum traders such as commodity trading advisors and other quantitative funds likely played a big role in the slide by unwinding long Bitcoin futures positions, strategists led by Nikolaos Panigirtzoglou wrote in a Nov. 27 note.

“The previous froth in momentum traders’ positioning has been cleared to a large extent,” they wrote, while adding momentum signals will continue to deteriorate unless Bitcoin recovers quickly.

The largest cryptocurrency slid as much as 14% on Nov. 26, not long after nearing its December 2017 record high of $19,511. Profit-taking and concern about new regulations were among the factors cited for the slump, which revived questions about whether digital assets are in an unsustainable bubble.

Bitcoin is still up about 160% so far this year. Proponents argue that a broadening investor base and the need for additional ways of diversifying portfolios amid the pandemic point to further gains.

They added that investments into and out of the Grayscale Bitcoin Trust will be key, referring to a fund that invests in and tracks the price of Bitcoin. If flows into the trust wane, the Bitcoin price could suffer if momentum traders keep backing away, according to the strategists.

Read more: Guggenheim Fund Reserves Right to Put Up to 10% in Bitcoin Trust

“A failure by the Grayscale Bitcoin Trust to receive additional inflows over the coming weeks would also cast doubt to the idea that institutional investors such as family offices have embarked on a trend of embracing Bitcoin as digital gold replacing traditional gold as a long-term investment,” the strategists wrote.