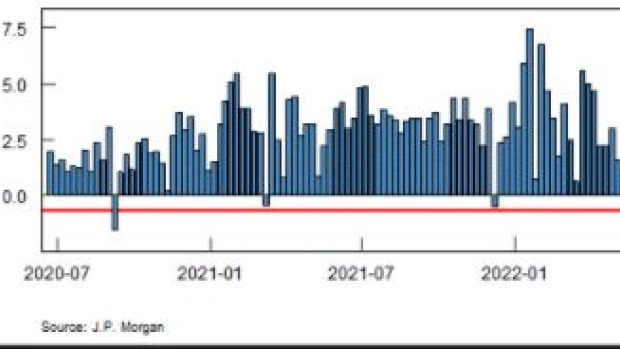 (Bloomberg) -- Some of the last bulls at the party are finally yielding to the bear market, bailing from stocks at the fastest rate in nearly two years.

Retail investors, who’d almost always bought the dip since the pandemic crash, exited shares in the past week, with sales reaching the heaviest since September 2020, according to an estimate by JPMorgan Chase & Co. based on public data on exchanges.

The exodus marks a notable shift for small-time traders who mostly hung on during the $15 trillion selloff this year. Sentiment is finally cratering with losses piling up in their favorite stocks as well as cryptocurrencies, says JPMorgan strategist Peng Cheng.

“There’s been a trend of weakening demand,” Cheng said in an interview. “It’s fair to say that retail has capitulated.”

The disaffection is welcome news to market watchers who focus on signs of cathartic selling that they say would indicate the downdraft has reached its bottom. From hedge funds to quant traders, professional investors have slashed their equity exposure to multiyear lows. Now, the day-trader army is joining the crowd of bears after spending many months clashing with the pros.

Not that gambler spirits have been snuffed out entirely among the retail crowd, many of whom cut their investing teeth during Covid lockdowns, armed with government stimulus checks. On Wednesday, they piled into shares of Revlon Inc., a cosmetics maker that this month filed for bankruptcy, sparking a 34% surge in the stock.

But broadly speaking, the once-euphoric buying is cooling. Retail demand tracked by JPMorgan has been below one-year average for the last eight weeks. In the options market, bearish puts are in vogue, a departure from last year, when bullish calls were sought frenetically for quick profits.

It’s not hard to see why amateurs are finally giving up. With the S&P 500 dropping as much as 23% from its peak and the Nasdaq 100 down more than 30%, the gains that newbie traders once took pride in are quickly evaporating. As of June 13, all their trading profits made during the meme-stock era had been wiped out, JPMorgan estimated.

“They were a significant driver of the inflated valuations we saw in tech and crypto,” said Michael Wang, chief executive officer at Prometheus Alternative Investments. “The reality is retail tends to buy the most at the top and the least at the bottom. We’ve seen this before in pretty much every market cycle, including the dot-com crash.”