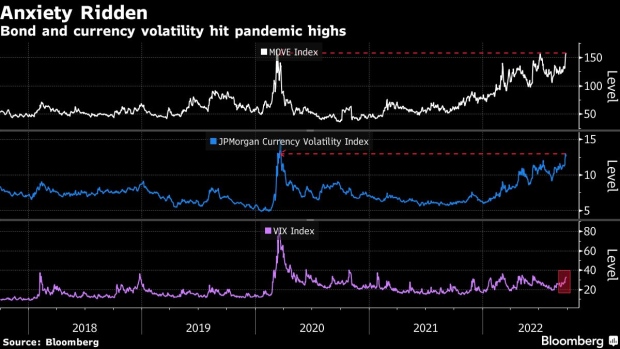 (Bloomberg) -- The US stock market is sending a crystal clear signal on its view of the economy -- a recession is all but imminent.

That’s the verdict from a trading model created by JPMorgan Chase & Co. strategists. It’s now saying the S&P 500’s 6.5% rout since the Federal Reserve turned extremely hawkish last week implies a 92% probability of US recession, up from 51% in August. Other assets are also flashing a similar warning. Pricing of base metals now carries a recession probability of 96%, up from 84% in August.

The sharp repricing in everything from stocks to Treasuries and the dollar shows markets finally accepting clarion signals from a parade of Fed officials that they are willing to accept an economic slump as the price for cooling inflation. For over a decade, the central bank was the market’s best friend, but a generational spike in prices has left the Fed solely focused on tamping them down, no matter the impact to asset prices.

For months market commentators warned that the Fed was late with its efforts to battle inflation. Now, after three straight meetings that delivered three-quarter-point rate increases and a series of warnings that more hikes were in the offing, markets have started pricing a Fed that risks going too far.

Wall Street has been in turmoil ever since, with volatility gripping everything from stocks to bonds to commodities. The cross-asset selloff has driven 10-year Treasury yields to 4%, a 2008 high, and the S&P 500 index to a 2022 low. Only credit remains fairly isolated. Measures of turbulence in bonds and currency prices jumped to the highest since the onset of the pandemic in March 2020.

“If it’s no longer confined to just one asset class, but spreading across multiple asset classes then this is the ultimate sign of contagion,” said Max Kettner, chief multi-asset strategist at HSBC Holdings Plc. “So far the spillover into credit is missing, which is where we see most spillover risks into equities in the coming weeks and months.”

Confidence that a Fed sobered by crashing markets and a stalled economy would retreat from its tightening path has evaporated, according to Lewis Grant, a senior portfolio manager at Federated Hermes.

These hopes were alive even last week, after the Fed’s latest policy decision that came with ample warning from Fed Chair Jerome Powell of the painful slowdown needed to curb price pressures at four-decade highs.

“Initially markets did not know which way to turn, with major equity indices selling off given the gloomy projections, then reversing course and rallying, presumably at the potential for slow growth to limit rate rises despite the Fed’s rhetoric,” Grant wrote in a note.

Government bonds are the only one of the five cross asset recession metrics where odds are ostensibly falling. Yields are moving counter-intuitively to reflect rate hikes, even though a recession would typically cause yields to fall.

JPMorgan calculates the metrics by comparing the pre-recession peaks of various classes and their troughs during the economic contraction.

Forecasts among economists in the same period have also jumped to a consensus of 50% from 40%.

Median projections show Fed officials forecast rates of 4.4% by the end of this year, rising to 4.6% in 2023. This implies another 125 basis points this year, a sign that the Fed is continuing their aggressive tightening campaign.

The increased volatility comes as the selloff in the riskier corners of the market deepened this week after a slew of hawkish Fed speakers stoked fears about rising interest rates, adding to the worries of a global recession.

“The Fed is signaling more than discomfort, with Jerome Powell repeatedly referring to ‘pain’,” Grant wrote. “The phrase ‘soft landing’ is now going the way of ‘transitory inflation’ confined to the history books.”