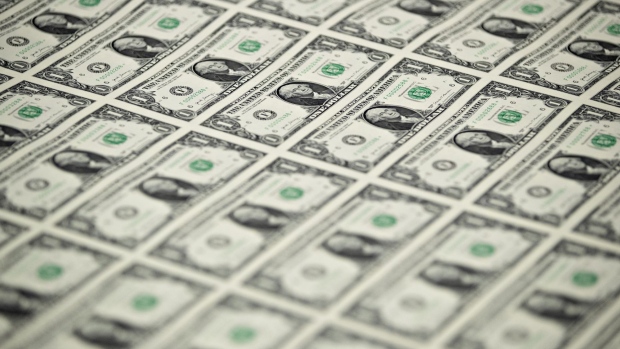 A 2017 50 subject uncut sheet of $1 dollar notes bearing the name of U.S. Treasury Secretary Steven Mnuchin sits on display at the U.S. Bureau of Engraving and Printing in Washington, D.C., U.S., on Wednesday, Nov. 15, 2017. A change in the Senate tax-overhaul plan that would expand a temporary income-tax break for partnerships, limited liability companies and other so-called "pass-through" businesses won the endorsement of a national small-business group today. Photographer: Andrew Harrer/Bloomberg , Bloomberg

(Bloomberg) -- As the idea of central bank digital currencies starts to gain traction, the U.S. in particular needs to pay attention or risk losing a major aspect of its geopolitical power, according to JPMorgan Chase & Co.

“There is no country with more to lose from the disruptive potential of digital currency than the United States,” analysts including Josh Younger, head of U.S. interest-rate derivatives strategy and Michael Feroli, chief U.S. economist, wrote in a report. “This revolves primarily around U.S. dollar hegemony. Issuing the global reserve currency and the medium of exchange for international trade in commodities, goods, and services conveys immense advantages.”

Overall, there’s a reasonable case to be made for central banks to introduce digital currencies, the analysts wrote, though they’re unlikely to have the transformative impact some have hoped.

JPMorgan doesn’t see the greenback being toppled as the world’s reserve currency anytime soon. But the analysts wrote that “more fragile” aspects of dollar dominance, including in trade settlement and the SWIFT messaging system, could be at risk. Even an aligned power like the European Union might want to reduce U.S. sway over global payment systems, the analysts said. They pointed to SWIFT suspending access for some Iranian banks in 2018, which arguably might have been a violation of EU laws.

If other countries were able to circumvent the SWIFT system and the dollar’s domination, it would be much more difficult for the U.S. to carry out its goals in sanctions and terrorist-financing enforcement, the report said.

“Offering a cross-border payments solution built on top of a digital dollar would, particularly if designed to be minimally disruptive to the structure of the domestic financial system, be a very modest investment to protect a key means to project power in the global economy,” they said. “For high-income countries and the U.S. in particular, digital currency is an exercise in geopolitical risk management.”

Chairman Jerome Powell said in February that the Federal Reserve was undertaking broad work looking at the issues with regard to a digital currency, while making no commitments.