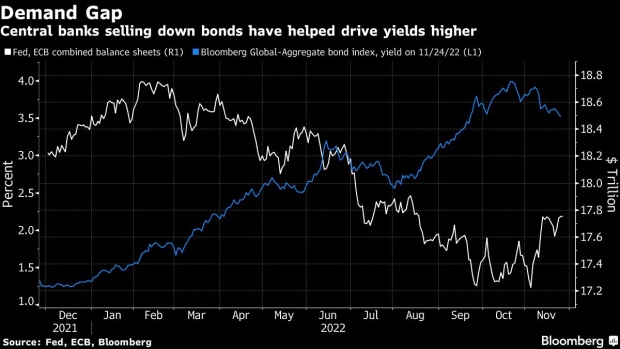 (Bloomberg) -- The worst may soon be behind global bonds as an improvement of about $1 trillion in the supply-demand equation should help bring yields lower, according to JPMorgan Chase & Co.

The key driver will be estimated reduction of $1.6 trillion in global bond supply, outpacing an estimated deterioration of about $700 billion in demand, strategists led by Nikolaos Panigirtzoglou in London wrote in a research note Thursday. That decline in demand will be a major improvement from the $5.9 trillion slide last year, they said.

Bonds have slumped around the world in 2022, leading to the first bear market in a generation, as central bank interest-rate hikes pushed up yields and volatility. Global debt has tumbled 16% this year, heading for its first ever back-to-back annual decline since at least 1990, according to a Bloomberg index. Still, the gauge has risen more than 5% in November amid the lure of higher yields and the prospect of slower Federal Reserve tightening.

“After unprecedented deterioration this year, we expect the balance between bond demand and supply to improve,” the JPMorgan strategists wrote. “With analysts focusing on 2023 outlooks, there is an emerging consensus view that softening growth and declining inflation should contribute to declines in bond yields.”

Central banks are likely to sell more of their debt stockpiles via quantitative tightening next year, while commercial banks are also expected to keep trimming their holdings, according to the JPMorgan team. Meanwhile, there’s likely to be increased demand from foreign reserve managers, pension funds and retail investors, with the last two being drawn in by higher yields, they wrote.

The increase in net demand next year is likely to reduce the yield on the Bloomberg Global Aggregate bond index by about 40 basis points, the strategists said. The yield is currently at 3.52%.