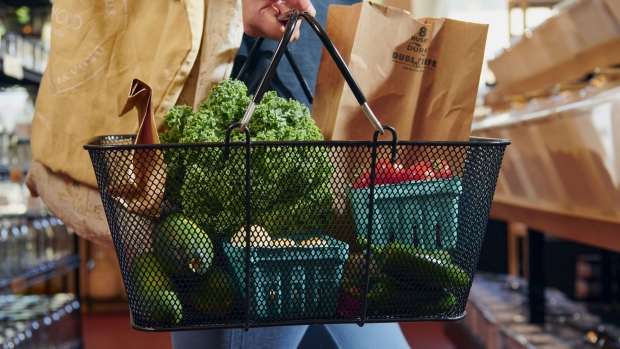 A customer shops at the Realm Refillery zero waste grocery store in Portland, Oregon, US, on Wednesday, Aug. 3, 2022. As more Americans find themselves existentially distressed by everything from trash gyres in the ocean to microplastics in our bloodstreams, many are spurning single-use plastics and bringing "zero-waste stores" increasingly in vogue. , Bloomberg

(Bloomberg) -- JPMorgan Chase & Co. economists projected the US will enter a “mild” recession next year thanks to interest-rate hikes that could cost more than 1 million Americans their jobs, and the Federal Reserve will pivot to cutting borrowing costs in 2024.

The Fed will probably raise its benchmark rate by 50 basis points in December and 25 basis points at each of the first two meetings in 2023 to reach a target range of 4.75% to 5% before pausing, economists Michael Feroli and Daniel Silver said in a report Wednesday.

Inflation will be slowing enough to allow the central bank to start reducing rates by 50 basis points per quarter starting in the second quarter of 2024, reaching 3.5% by the end of that year, the analysts said.

“We also expect slowing aggregate demand eventually leading to labor market weakness that builds on itself, and we anticipate that we could lose over a million jobs by the middle of ’24,” they wrote. “This labor market weakness will convince the Fed that it has generated enough disinflationary impetus that it can start to ease policy toward a more neutral posture.”

A deeper downturn, however, could prompt the central bank to lower borrowing costs more aggressively, for example if spurred by a fight in Congress over the federal debt limit that sets up the risk of a technical default, Feroli and Silver said.