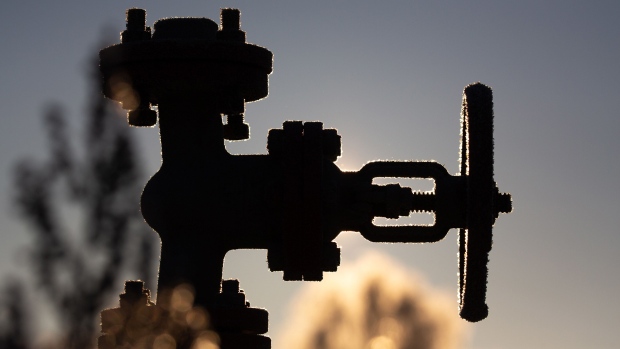 A valve control wheel connected to crude oil pipework in an oilfield near Dyurtyuli, in the Republic of Bashkortostan, Russia, on Thursday, Nov. 19, 2020. The flaring coronavirus outbreak will be a key issue for OPEC+ when it meets at the end of the month to decide on whether to delay a planned easing of cuts early next year. Photographer: Andrey Rudakov/Bloomberg , Bloomberg

(Bloomberg) -- If the European Union is serious about squeezing Russian oil, it may need to brace for some pain.

A full and immediate ban could displace more than 4 million barrels a day of supplies -- propelling Brent prices up by around 65% to $185 a barrel, JPMorgan warns. And there wouldn’t be enough appetite or time to re-direct the barrels to China and India, analyst Natasha Kaneva says.

However, a gradual phase-out over about four months, similar to the approach taken with Russian coal supplies, could be pulled off without significantly disturbing prices, Kaneva adds.

The bank’s main scenario is much more conservative, estimating a cut in Russian supplies to Europe that’s about half as severe, with about 2.1 million barrels a day disrupted by year-end.

In practice, the abandonment of Russian volumes has been a slower process than initially expected: the bank projects that Russian exports will drop 1.5 million barrels a day this month, or 25% less than first assumed. Exiting agreements with Russian companies, typically on long-term contracts, would take time.

But if the horrors of the war in Ukraine galvanize the EU into more muscular action, the hit to supplies -- and discomfort for consumers -- could be much bigger.