Bitcoin rally fizzles after surging as high as US$34,000

Bitcoin may have the potential for substantial further gains over the long term as it competes with gold for investment flows, according to JPMorgan Chase & Co.

Bitcoin’s market capitalization of around US$575 billion would have to rise by 4.6 times -- for a theoretical Bitcoin price of US$146,000 -- to match the total private sector investment in gold via exchange-traded funds or bars and coins, strategists led by Nikolaos Panigirtzoglou wrote in a note. But that outlook depends on the volatility of Bitcoin converging with that of gold to encourage more institutional investment, a process that will take some time, they said.

“A crowding out of gold as an ‘alternative’ currency implies big upside for Bitcoin over the long term,” the strategists wrote Monday. However, “a convergence in volatilities between Bitcoin and gold is unlikely to happen quickly and is in our mind a multiyear process. This implies that the above-US$146,000 theoretical Bitcoin price target should be considered as a long-term target, and thus an unsustainable price target for this year.” 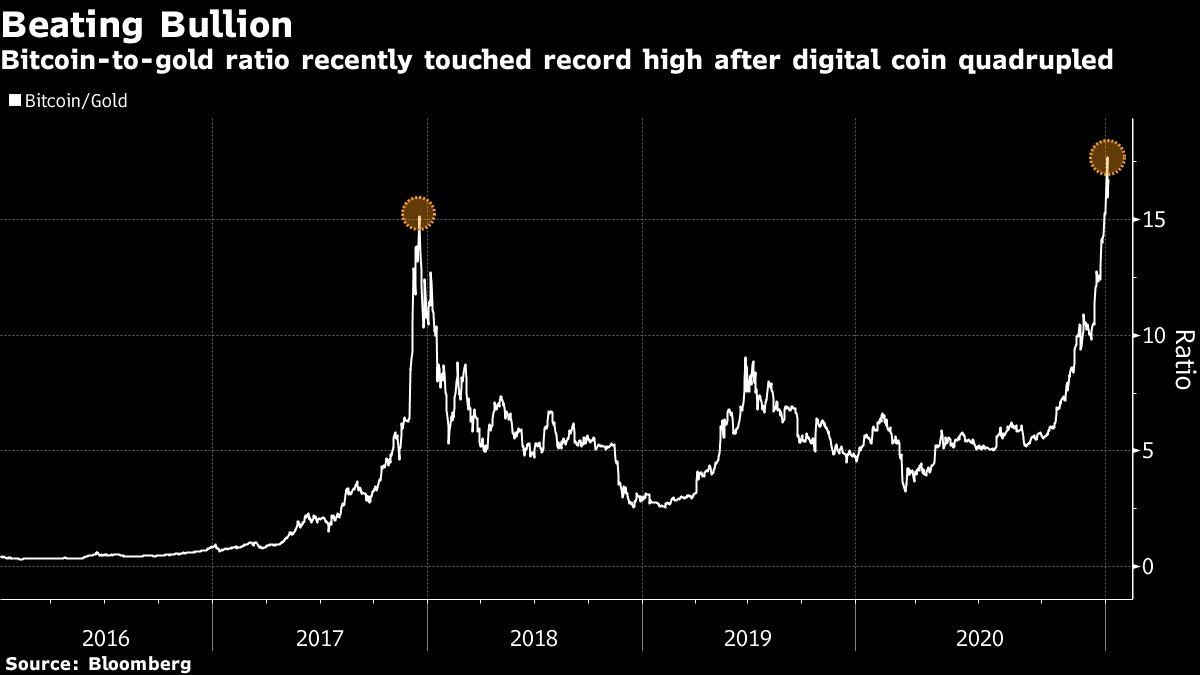 Bitcoin slid as much as 17 per cent on Monday, the biggest drop since March, after breaching US$34,000 for the first time over the weekend. The swings are a reminder of the famed volatility of the largest cryptocurrency, whose price has more than quadrupled over the past year.

More institutions and noted investors, from Paul Tudor Jones to Scott Minerd and Stan Druckenmiller, have either started allocating funds into Bitcoin or have said they’re open to doing so. While some argue that the cryptocurrency offers a hedge against dollar weakness and inflation risk in a world awash with fiscal and monetary stimulus, others say retail investors and trend-following quant funds are pumping up an unsustainable bubble.

For now, JPMorgan sees headwinds for the largest cryptocurrency, with indicators like a buildup of speculative long positions and an increase in investment wallets holding small amounts of Bitcoin showing potential froth.

“The valuation and position backdrop has become a lot more challenging for Bitcoin at the beginning of the New Year,” the strategists wrote. “While we cannot exclude the possibility that the current speculative mania will propagate further pushing the Bitcoin price up toward the consensus region of between US$50,000-US$100,000, we believe that such price levels would prove unsustainable.”