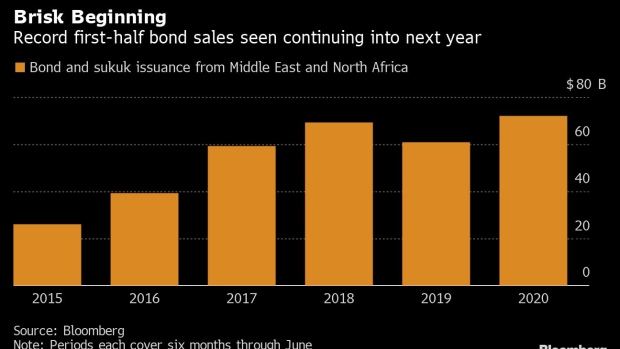 Waste building materials stand at the construction site of the Dubai Design District within view of the Burj Khalifa skyscraper, center, among other office buildings on the city skyline in Dubai, United Arab Emirates, on Tuesday, June 9, 2020. “An exodus of middle class residents could create a death spiral for the economy,” said Ryan Bohl, a Middle East analyst at Stratfor.” Photographer: Christopher Pike/Bloomberg , Bloomberg

(Bloomberg) -- The financial fallout from the coronavirus pandemic will keep fueling debt issuance from the Middle East into 2021, while also stoking mergers and acquisitions as companies seek to consolidate, according to JPMorgan Chase & Co.

Growth in lending by the bank, coupled with fees from arranging bond and M&A deals, will drive the U.S. company’s operations in the region, Karim Tannir, JPMorgan’s joint-senior country officer for the Middle East and North Africa, said in an interview. The United Arab Emirates and Saudi Arabia will be the main drivers.

The first six months saw $72 billion of bond issuance from the region, the busiest start yet, with JPMorgan among the top arrangers, according to data compiled by Bloomberg. Governments have been tapping debt markets to shore up finances battered by a slump in oil prices and as lockdowns to curb Covid-19 weigh on their economies.

Interest in the region is helped by currencies that are pegged to the dollar, good sovereign credit ratings and the absence of capital controls, Tannir said. Abu Dhabi National Oil Co., the state-owned energy producer, has attracted billions of dollars from the likes of Brookfield Asset Management Inc., BlackRock Inc., KKR & Co., and Singapore’s wealth fund by selling stakes in its assets.

“The financial sector, consumer retail, real estate, tourism -- all these sectors are ripe for consolidation,” Tannir said. “Some of the deals we will see may not have been driven by Covid-19, but that is now going to accelerate consolidation.”

As Oil and Virus Drive Gulf Bank Mergers, Who’s Talking to Whom

While initial public offerings have slowed following the Covid-19 outbreak, a “few transactions” may be announced before the end of 2020, Tannir said, declining to give details.

Cash-flush sovereign wealth funds have been a source of deal flow. Saudi Arabia’s Public Investment Fund in May said it bought stakes in companies including BP Plc, Boeing Co., Facebook Inc. and Walt Disney Co. during the worst of the market rout in March.

“We see that continuing into 2021,” Tannir said. “Whenever there is a dip in the market there is a high likelihood that they’ll take another look.”