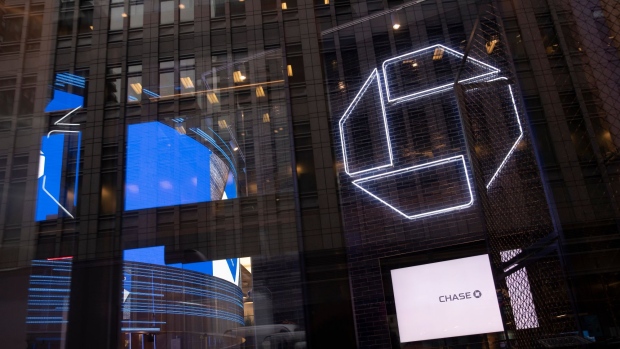 Signage at a Chase bank branch in New York, U.S., on Thursday, Jan. 13, 2022. JPMorgan Chase & Co. posted a decline in trading revenue that was steeper than analysts expected, and both commercial and consumer loans fell from a year earlier. Photographer: Victor J. Blue/Bloomberg , Bloomberg

Moy, who is global head of JPMorgan’s blockchain product Liink, is pursuing an external opportunity, according to an internal memo Tuesday from Umar Farooq, head of Onyx, JPMorgan’s blockchain unit. Moy will be replaced by Sushil Raja, most recently Onyx’s chief financial officer and head of strategy.

“Christine has been instrumental in building and leading JPMorgan’s blockchain program, dating back to 2015 when the blockchain team consisted of fewer than five people,” Farooq wrote in the memo. “Fortunately, we have a very strong bench of exceptional leaders and experts in distributed ledger technology that will enable us to lead and innovate in this space in the future.”

A JPMorgan spokesperson confirmed the contents of the memo.

It’s not immediately clear where Moy is going. Executives from traditional financial-services firms have become increasingly comfortable with joining crypto and blockchain companies, where decision-making tends to be faster and hierarchies looser, according to a recent survey by search firm Heidrick & Struggles and the Global Blockchain Business Council.

JPMorgan has been a proponent of blockchain technology and its use in financial transactions, including using its own JPM Coin to conduct billions of dollars in intraday repurchase agreements. The bank launched Onyx in 2020, and the business now has about 200 employees.

Earlier this month, JPMorgan became the first Wall Street bank to join the metaverse, with a lounge at the Metajuku mall in Decentraland, a browser-based metaverse backed by the Digital Currency Group. The lounge opening coincided with a paper Moy co-authored on how businesses can explore opportunities in the metaverse.