Cathie Wood’s flagship ETF is showing many of the bubble-like traits seen in growth-based funds in 2000 and investors should consider betting against it with options, according to JPMorgan Chase & Co.’s Shawn Quigg.

The derivatives strategist reckons a second-half increase in Treasury yields could trigger declines for the ARK Innovation exchange-traded fund (ticker ARKK), which is up about 19 per cent since mid-May.

“Enter the bull trap reversal,” Quigg wrote in a Thursday note to clients. “A looming rise in yields could be a catalyst to accelerate ARKK shares lower, in addition to the continued outperformance of large staple-tech stocks over disruptive-tech stocks, and pressing ARKK into the capitulation phase.” 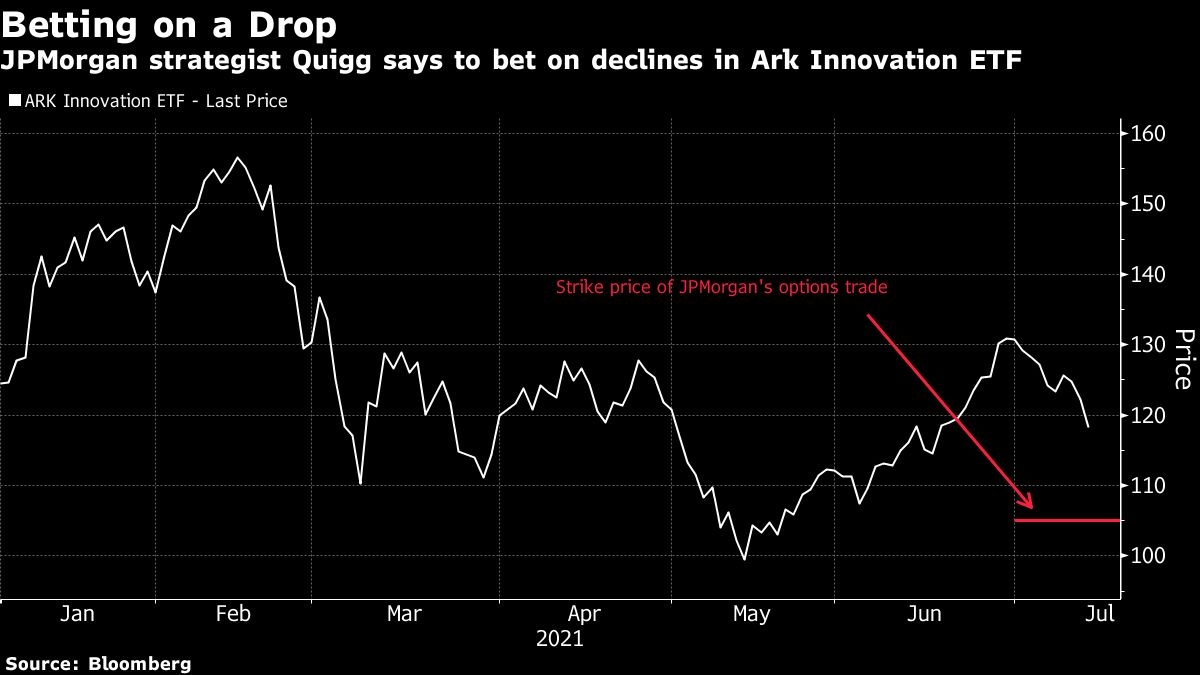 The 10-year U.S. Treasury yield has fallen more than 40 basis points to about 1.32 per cent from a recent peak at the end of March, helping spur the rebound for ARKK. Quigg argues that’s a technical move, set to be undone as the reopening trade reasserts itself in the rest of the year.

Wood’s Ark Investment Management enjoyed a stellar start to 2021 propelled by gains in sectors such as electric vehicles, biotech and cryptocurrencies, as well as advances in stocks that benefited from the stay-at-home trade. But many of those themes faltered, and the firm’s main ETF fell more than 35 per cent from mid-February through mid-May.

JPMorgan expects cyclical and value assets to outperform amid the ongoing recovery and reopening from the pandemic. Value stocks just had their worst month versus growth counterparts in two decades, but the firm’s strategists see that as a pause in a rally that’s set to resume.

Quigg recommends investors buy ARKK October US$105 puts -- the strike price about 11 per cent below the ETF’s closing level on Wednesday -- to take advantage of implied volatility that remains low even amid “the potential for shares to enter a broader capitulation phase,” he wrote.