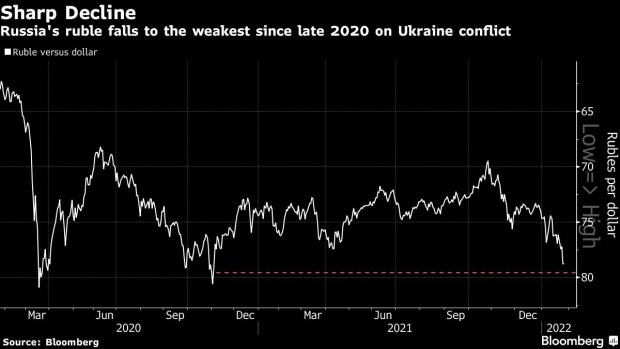 While Russia has built up troops near its border with Ukraine, President Vladimir Putin has repeatedly said he currently has no plans to attack.

Still, the ruble has borne the brunt of the pain as investors reconsidered their once-bullish views. It has lost more than 5% this month, the most among emerging markets tracked by Bloomberg. Its rapid depreciation has prompted the central bank to halt regular foreign-currency purchases for its wealth fund to avoid any additional pressure on the Russian currency.

The U.S. is putting additional troops on heightened alert for possible deployment to bolster NATO forces in Eastern Europe as Russian troops gather at the Ukraine’s border. President Joe Biden’s administration has repeatedly said the U.S. would respond to an invasion with tough economic sanctions rather than sending troops to Ukraine.

The ruble is undervalued 13% and 10-year local-currency sovereign bonds, known as OFZ, are cheap by more than 100 basis points, JPMorgan analysts wrote. Benchmark bond yields stood at 9.70% on Tuesday, up more than a percentage point the end of last year. The Finance Ministry had paused its regular weekly auction over the volatility.

“Recent weekly data again point to a chance inflation might be peaking, but given the numerous false signals in the past several months, we believe it is worth waiting for more evidence,” JPMorgan’s Christovova and Harrison wrote. “Both a reduction in geopolitical uncertainty and clearer signs inflation has peaked are likely needed for a durable bond rally.”