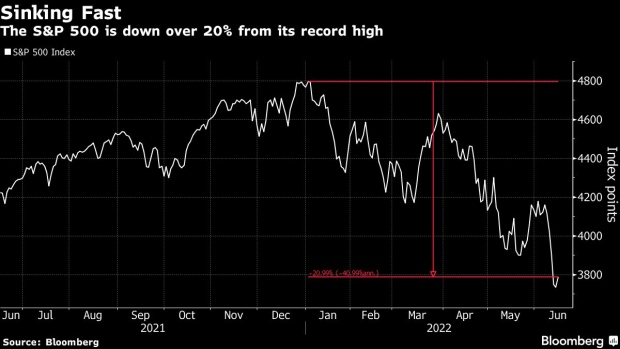 (Bloomberg) -- The S&P 500 now implies an 85% chance of a US recession amid fears of a policy error by the Federal Reserve, according to JPMorgan Chase & Co. strategists.

The warning from quant and derivatives strategists is based on the average 26% decline for the S&P 500 during the past 11 recessions and follows the US benchmark’s collapse into a bear market amid concerns about surging inflation and aggressive interest rate hikes.

“In all, there appear to be heightened concerns over recession risk among market participants and economic agents, which could become self-fulfilling if they persist prompting them to change behavior, e.g. by cutting investment or spending,” the strategists led by Nikolaos Panigirtzoglou wrote in a note. “Market concerns of a risk of policy error and subsequent reversal have increased.”

US stocks rallied on Wednesday after the Fed raised rates by 75 basis points, in line with expectations, but the positive mood quickly evaporated. Investor attention turned to the risks to growth as Chair Jerome Powell effectively admitted that a downturn was possible.

“The aggressive rate hikes by the Fed and the Bank of England have made a recession in both countries now virtually certain,” Liberum Capital strategists Joachim Klement and Susana Cruz wrote in a note “The good news is that while the recession may come as soon as the end of this year, it is likely to be a regular cyclical slowdown lasting six months or so and this means that while investors need to focus more and more on defensive stocks for now, the end of the recession and another bull market will be coming in 2023.”