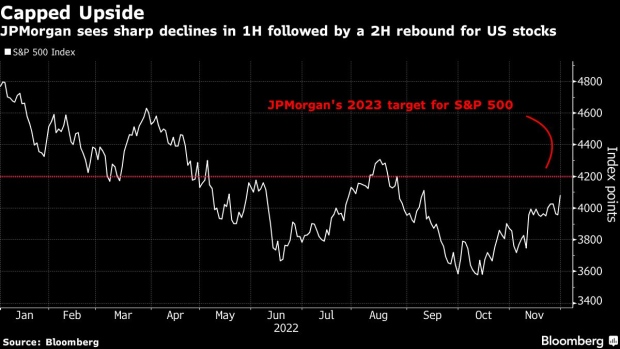 (Bloomberg) -- Sharp declines await US stocks in the first half of 2023 against the backdrop of a mild recession and Federal Reserve rate hikes, say JPMorgan Chase & Co. strategists.

The S&P 500 will likely re-test this year’s lows in the first half of 2023, they wrote in a note Thursday, implying a decline of about 12% from current levels. Their prediction adds to calls from strategists at Goldman Sachs Group Inc. and Deutsche Bank AG this week that US stocks are in for a wild ride next year.

“We do not expect this year’s constructive growth backdrop to persist in 2023,” strategists led by Dubravko Lakos-Bujas wrote in a note on Thursday. “Fundamentals will likely deteriorate as financial conditions continue to tighten and monetary policy turns even more restrictive.”

Worries about how far central bankers will go to rein in inflation have kept investors on edge, and equities volatile. Markets are still pricing in rate hikes from the Fed until mid-2023, although Chair Jerome Powell’s lack of a sharp-edged message sent Wall Street rallying Wednesday on optimism officials will back off from tightening too aggressively.

JPMorgan expects a pivot in the Fed’s hawkish policy to fuel a stock recovery in the second half of next year. Their target of 4,200 for end-2023 leaves an upside of about 3% from here on.

Central banks aside, they also see pressure building on corporate profits from lower spending by both consumers and companies. They now expect US earnings to fall 9% next year amid weaker demand and pricing power, further margin compression and lower corporate share buyback.

Here are some more calls by JPMorgan for next year:

--With assistance from Thyagaraju Adinarayan.