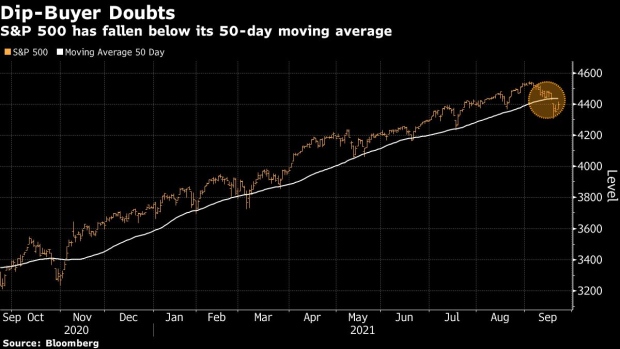 A revolving door outside the JP Morgan Chase & Co headquarters in New York, U.S., on Monday, June 14, 2021. On Tuesday, Governor Andrew Cuomo lifted New York state’s pandemic mandates effective immediately, saying that 70% of the adult population has now been given at least one dose of a coronavirus vaccine. Photographer: Nina Westervelt/Bloomberg , Bloomberg

(Bloomberg) -- Flow measures for the S&P 500 Index signal that the psychology of buying the dip in U.S. equities is fraying, according to JPMorgan Chase & Co. strategists.

An outflow of $11 billion from equity exchange-traded funds on Sept. 20 -- the biggest on a down day this year outside of quarterly options and futures expirations -- is “rather concerning” because it’s inconsistent with the buy-the-dip behavior that’s helped propel equities higher for months, JPMorgan strategists led by Nikolaos Panigirtzoglou wrote in a note Wednesday.

“Observing flows for signs that this change in behavior would prove more persistent is important over the coming days,” they said, adding that an inflow on Sept. 21 of $2 billion was “rather muted.”

The buy-the-dip mantra among retail investors helped to power the near-doubling in U.S. stocks from pandemic-induced lows in March last year. The phenomenon saw the S&P 500 reliably bounce off its 50-day moving average. But it’s now sitting below that marker as investors fret over waning stimulus, high inflation and a debt crisis in China’s property sector.

Commentators are split on the outlook for U.S. shares: Goldman Sachs Group Inc.’s Peter Oppenheimer said investors should use a 10% drop to load up on stocks, while BTIG LLC strategist Julian Emanuel has argued that the recent drawdown is likely to morph into a major test of the resolve of retail investors.

Panigirtzoglou’s team is in wait-and-see mode, saying they need more significant inflows into equity ETFs over coming days to conclude that buy-the-dip is alive and kicking.