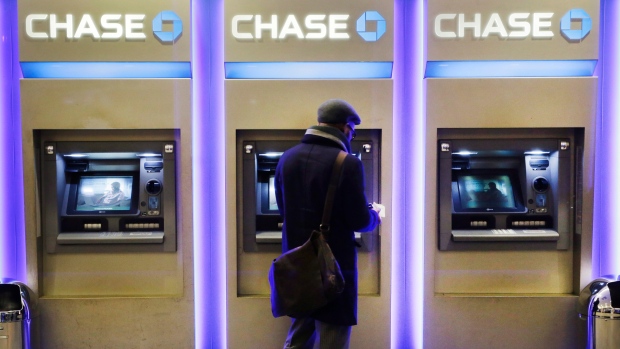 JPMorgan Chase & Co, the biggest U.S. bank by assets, reported a 7.6 per cent drop in quarterly profit on Friday after recording a tax expense, compared with a rare tax benefit a year earlier, but both revenue and profit beat analyst estimates.

The year-earlier net profit was boosted by a tax benefit of US$2.2 billion.

On a pre-tax basis, profit rose 32.8 per cent to US$8.94 billion, helped by a drop in non-interest expenses and a slight increase in revenue following the Federal Reserve's interest rate hike last December, the first since the financial crisis.

Analysts on average had expected earnings of US$1.39 per share, according to Thomson Reuters.

JPMorgan is the first big U.S. bank to report third-quarter results. Wells Fargo & Co and Citigroup Inc, the third and fourth-biggest U.S. banks by assets, are scheduled to report later on Friday. Bank of America Corp, the second biggest, will report on Monday.

JPMorgan's total revenue rose 8.4 per cent to US$25.51 billion, beating the average estimate of US$23.99 billion, helped by volatile trading following Britain's vote on June 23 to leave the European Union and speculation surrounding monetary policies in the United States, Europe and Japan.

"We delivered strong results this quarter with each of our businesses performing well," Chief Executive Jamie Dimon said in a statement.

The bank's non-interest expenses fell 5.9 per cent to US$14.46 billion. Like other lenders, JPMorgan has been cutting costs to help make up for weak revenue from lending and capital markets as well as near record-low low interest rates.

The Fed raised rates by 0.25 percentage points in December. At the start of the year, more hikes were widely expected this year but none have materialized, in part due to the Brexit vote.

Low interest rates have been holding down bank profits for years and bank executives have been pining for another increase. Many Fed watchers now believe that will happen in December.

JPMorgan's return on tangible common equity, a key performance measure, was 13 per cent in the latest quarter, compared with the bank's longer-term target of about 15 per cent.

Up to Thursday's close, JPMorgan's shares had risen 2.6 per cent since the start of the year.