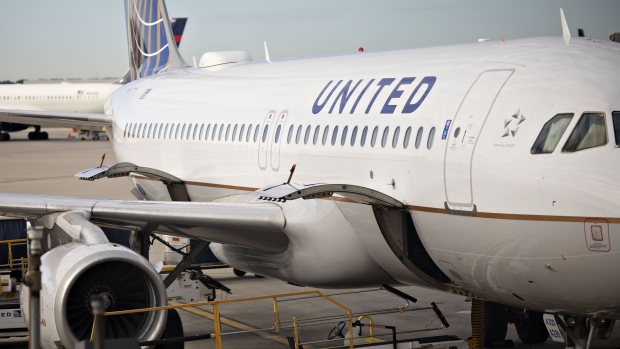 People watch as a United Airlines Holdings Inc. plane arrives at a gate at the Pittsburgh International Airport (PIT) in Moon Township, Pennsylvania, U.S., on Tuesday, July 2, 2019. Programs adopted or being considered by a number of airports allow people beyond security checkpoints so they can meet arriving relatives or just hang out as airports expand options to fill passenger dwell time. Photographer: Justin Merriman/Bloomberg , Bloomberg

The new deal, and an amended pact with Visa, gives United an extra US$400 million this year, according to a regulatory filing Friday by the airline. United declined to provide additional details on the financial impact of the agreement.

Revamping the airline’s deal with JPMorgan has been a top priority for United President Scott Kirby, who will take over as chief executive officer in May. He and Andrew Nocella, United’s chief commercial officer, worked together at American Airlines Group Inc. and collaborated when that carrier negotiated new arrangements with Citigroup Inc. and Barclays Plc.

In recent months, Kirby has become increasingly vocal about his desire to ink a new deal with JPMorgan. When American Express Co. signed a new pact with Delta Air Lines Inc. last year, Kirby said United’s negotiations with JPMorgan got an “octane boost.”

“This extension strengthens ties with our partners at Chase and Visa and is expected to drive growth across our industry-leading credit card portfolio,” Luc Bondar, United’s vice president of loyalty, said in a separate statement announcing the renewal.

United climbed 2.6% to US$80.05 after the close of regular trading in New York. The shares have dropped 11% so far this year, the biggest decline on a Standard & Poor’s index of major U.S. carriers.

Last month, JPMorgan and United announced they would offer sign-up bonuses on all four of their joint cards for the first time and introduced a new card for small-business owners. The companies’ portfolio of cards has been growing at a double digit rate for seven consecutive quarters, they said in the statement.

Investors have been pushing airlines for more disclosure about how profitable their co-branded cards have become in recent years. While airlines have been reluctant to disclose more, Delta has said that with its new AmEx deal, it expects its co-branded card partnership to contribute roughly US$7 billion in annual revenue by 2023.