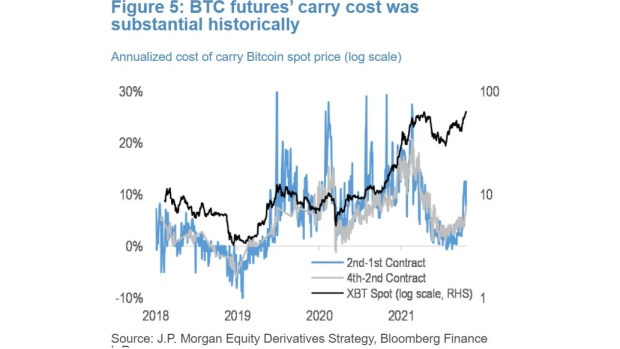 (Bloomberg) -- Before the game-changing launch of the first ever Bitcoin-linked ETF in the U.S., plenty on Wall Street cautioned the derivatives-powered trade was no free lunch, given the holding costs.

It’s a pressing issue, as the ProShares Bitcoin Strategy ETF (ticker BITO) has amassed a whopping $1.1 billion in just two days after one of the most successful launches in history.

The problem is the cost of continually rolling over contracts held by the fund, known as carry. JPMorgan strategists Bram Kaplan and Marko Kolanovic note that BITO alone already accounts for a quarter of open interest in both October and November Bitcoin contracts -- and more ETFs are coming.

“This futures carry drag could become even larger if these products gather substantial assets,” Kaplan and Kolanovic wrote in a Thursday note. “They will be bidding up both the futures curve further relative to spot prices and the rolls between contracts, driving a larger carry cost.”

Since mid-2019, the average annualized cost of roll down between the second and first Bitcoin futures was about 9%, according to the strategists. Between the fourth and second futures was around 8%.

That means the carry cost for a Bitcoin futures-based ETF could already be several times larger than the product’s management fees, according to JPMorgan. In the case of BITO, the expense ratio is 0.95%.

There are multiple other funds in the pipeline. While they will be actively managed and can theoretically trade different points on the futures curve, Kaplan and Kolanovic draw a comparison with the emergence of volatility exchange-traded products, which grew to the extent they started to drive up their own costs.

“The more investors position long, the more expensive it becomes to hold due to the ETPs’ own market impact,” the pair wrote.